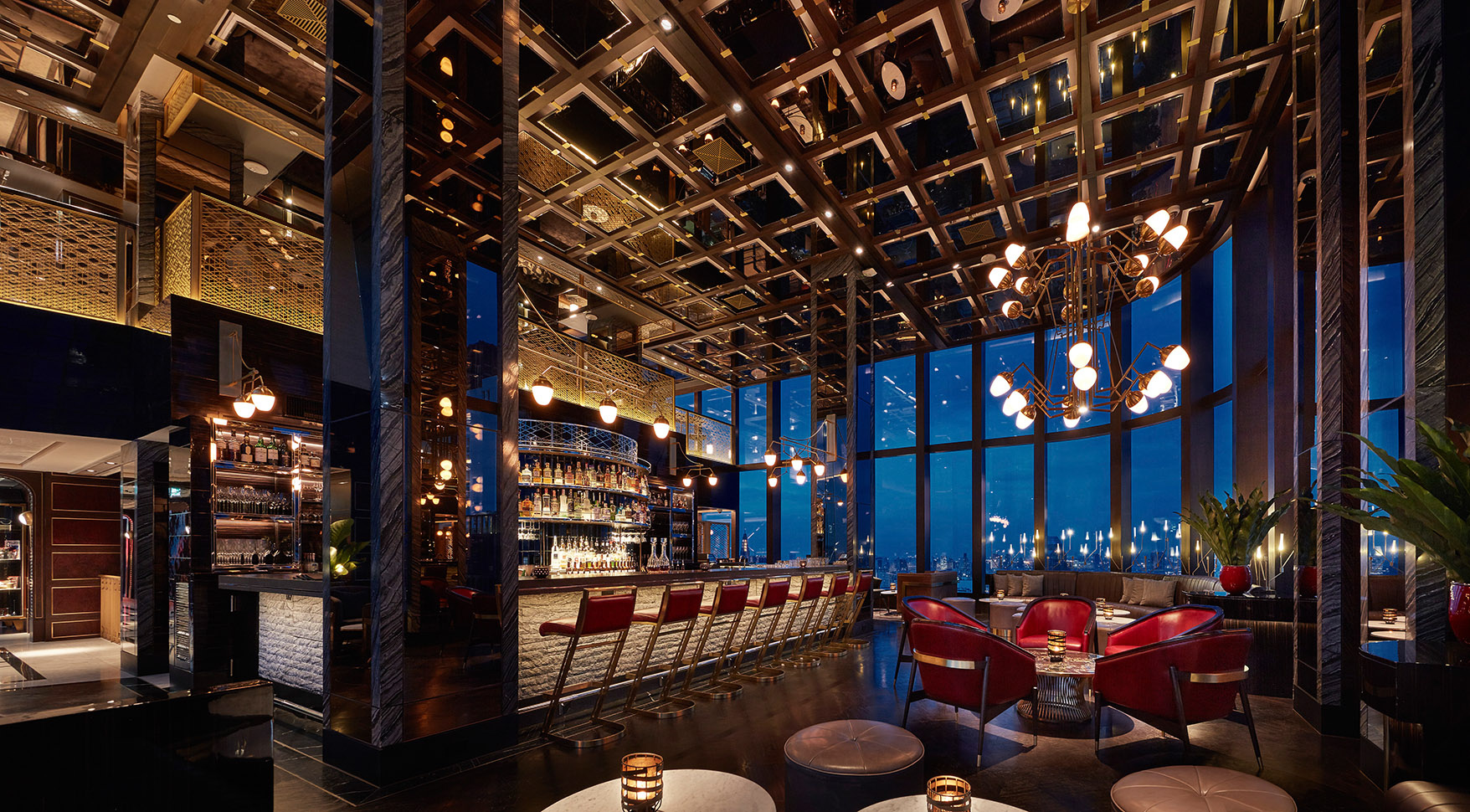 Where to drink in Bangkok this July 2019

One of the many things we love about Bangkok is that the city is never lacking in new trendy bars to check out. It’s a little tough for July to beat the incredible selection of new openings we uncovered in June, and so for the fresh post-mid-summer month the drinking scene returns a little to its favourite habits and haunts. There’s the annual week-long celebration of rum, a secret speakeasy you’ll be surprised you never knew about, and the continuous growth of a popular (and yet still relatively non-mainstream) drinking neighbourhood. July is a curious one. Here’s where you should sip, toast, and clink to take it all in.

Is there anywhere hotter than Charoenkrung if you’re a cool cat lately? The trendy creative district has been gifted yet another artsy watering hole with Badass Asia Bar, from the same guys who brought us Suan Plu’s Ku Thai towards the end of last year. This time situated inside the ATT 19 art hub and gallery, the recently-opened bar is bringing together Asian art and influences in a contemporary showcase of culture and cocktails. A perfect spot for those who like their local artists and tipple too, head over there to try special concoctions like the Man Go! (THB 350), made with gin, mango, and lemon. Seated within an airy space much reminiscent of your coolest design friend’s townhouse, pair it with a selection of Thai-style tapas, and you’ll get why Charoenkrung’s hype is sure to stay.

Note: Ku Thai has since closed down, so consider this a bit of a snazzy revamp and relocation.

We don’t even feel completely kosher revealing this one to you. Whilst Bangkok has long written a love letter to the art of the speakeasy and our city is rightfully brimming with them (or at least, deviations of them), here’s one that really requires you to be in the know, to, well, know. Nestled inside what would normally be a loud hint, Siam Flowers has managed to exist secretly and silently behind the Anantara Siam’s Aqua restaurant. There are no signs or clues at the entrance, yet once you enter, you will be invited into a dark red and floral interior of velvet and forest themes. The venue is said to have been an old flower shop (hence the decor), and takes this inspiration to its cleverly-named cocktail list, too. However, what ups the ante a little for Siam Flowers is a fresh level of customisation. Guests are invited to ask the bartender for off-menu items or even spontaneous creations, really adding to that ‘insider’s club’ feel. As you know, Bangkok goes crazy for that kind of thing.

Granted, drinking in a mall has less of an appeal than at a standalone venue, but consider this concept: a cold one, post-shopping, post-masses. And not just any cold one post-shopping post-masses, but a cold one from Mikkeller. That’s right — Ekkamai’s beloved craft beer hotspot has opened in a new location, this time taking to the high streets of Siam to bring Danish craft brews to the central city crowds. Acknowledging that even buzzing shoppers and city-goers need a spot to unwind after a day of being out and about, Mikkeller Discovery boasts ten craft beers on tap, and a selection of a further 50 cans and bottles. Prefer you a classic German brew or a more adventurous Hong Kong brew, there’s a little bit of everything for everyone here, with a sampling of Scandinavian-inspired sandwiches and snacks to suit. Bottles and cans are also available to grab on the go, so you could even do a bit of shopping here too; you know, if you really wanted to.

Calling all those with a thirst for theatrics: a new jazz bar with a stage theatre concept has opened in Charoenkrung, and with inspirations taken from the infamous Moulin Rouge, it’s sure to be a crowd-pleaser. Named To More, the self-proclaimed boutique bar is whisking visitors back into the 1940s and 50s with its vintage interiors and overall moody velvet vibes. Past a dark wood entrance and towards a curved bar, the cocktail menu is inspired by famous musicals and plays, ranging from a tangy Miss Saigon (THB 320) to a spicier tequila-based Phantom of the Opera (THB 320). The melodious atmosphere carries through from the design accents and drinks over to the music here too, with a live jazz band entertaining the crowds on most nights. Expect a selection of classic and contemporary jazz, as well as neo soul, disco funk, and swing, and leave perhaps slightly unsettled as to which decade you’re really in. Time warping.

Where June had both Negroni Week and the Bangkok Bar Show, July is all about rum. Back for its annual celebration of both local and international spirits, Thailand Rum Cocktail Week will return bigger and better for 2019, expanding from just Bangkok to a total of five participating cities. From Chiang Mai and Samui to Phuket and Krabi, the nation-wide event will see a host of signature rum cocktails prepared by international and local bartenders at leading bars across the country. Featuring an extremely lengthy list of participants, we’re quite impressed with the local line-up this July, spreading across the city from The Bamboo Bar to Sorrento, Tropic City, and Havana Social, just to name a very select few. With a spotlight on Thai rums like Mekhong and Phraya, it’s an exciting time to develop (or continue to embrace) a taste for rum, in the company of some of the region’s best.

Thailand Rum Cocktail Week runs from 8-15 July 2019. More information can be found on the Event Page.

A Night with Maggie Choo at the Penthouse

Put together one of Sukhumvit’s hottest rooftop bars with one of Silom’s most iconic nightclubs, and what might you get? In one of the snazziest collabs of sorts, the ever-alluring Maggie Choo’s will be taking over the Penthouse Bar at the Park Hyatt this July for one (likely very wild) night only. The special guest arrangement will see the assimilation of Maggie Choo’s Shanghainese girls, jazz band, and Asian-infused signature cocktails take the stage at the 1920s-inspired bar. It’s an intriguing one, seeing as the speakeasy-like club is rare to peep out of its underground venue, but it’s a match that deems fit, given the Penthouse’s previous love for Prohibition Era and Gatsby-themed parties. Drinks will include everything from the L’Amour de Choco, to the Rum in Tea (both THB 320++) with live music and a DJ spinning tunes long into the night.

Drinks Bangkok Bars Park Hyatt Cocktail Bars Maggie Choo's where to drink Penthouse Bar + Grill Bangkok bars Thailand Rum Cocktail Week Siam Flower Anantara Siam Hotel To More Bar Badass Asia Bar
Lisa Gries
Managing Editor, Bangkok
Lisa loves to travel, and is always on the lookout for the world’s best nap spots. She’s a serious Asian art history nerd, and has a knack for languages and coffee table books. She hopes to publish her own novels one day, one of which will likely be called ‘All The Great Conversations I Had In A Bangkok Speakeasy.’ It’s a work in progress.
Travel Drinks Watches Jewellery

The coffee capsule you should go for, according to your zodiac sign

Thirsty Thursday: cloudy sake with a chance of otoro

Wine Talk: what is the difference between a vin primeur and a vin nouveau?