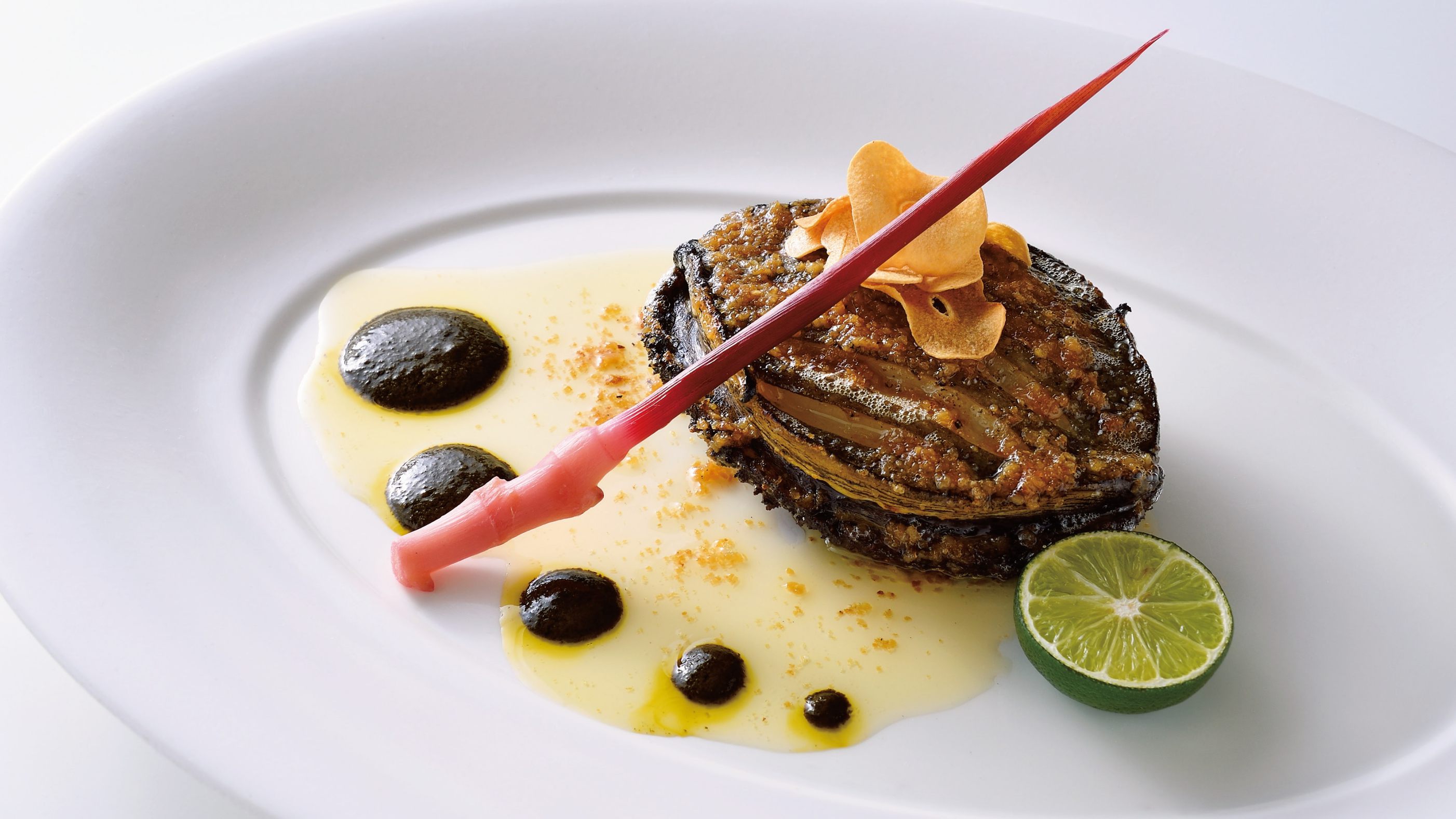 Best Bites: The top 8 dishes we ate in November

Food & Drink
Best Bites: The top 8 dishes we ate in November
Share this article
Next article

Best Bites is a roundup of the outstanding dishes we had within the last month, those which renewed our love for established venues, caught our attention at a new opening, or impressed on us again the creativity and skill of Hong Kong’s talented chefs. From casual street bites to meticulously prepared tasting menu dishes, these are the plates we’d recommend you make a special trip for. 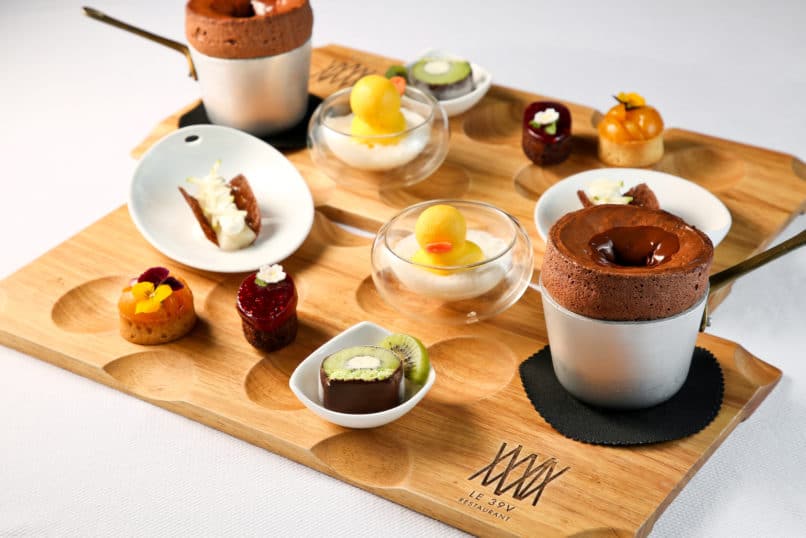 Soaring 101 floors above ground level, sophisticated French fine diner Le 39V has done a commendable job of upholding the quality of the original Paris flagship since it debuted overseas here in 2017. Recently, I had the pleasure of checking out their new weekend lunch menu, which is available as a 4- or 5-course option (HK$580 or HK$680 per person, respectively). The kitchen here toes the line beautifully between the warm comfort of bistro classics and the refinement of white tablecloth dining, from the bountiful seafood platter which kicked off the menu with a fresh assortment of mussels, clams, crab claws and abalone, to the hearty Provencal-style beef stew, a quintessential French dish which ticked all the boxes for a winter warmer. But what really impressed me the most was dessert: The colourful arrangement of pastries and parfaits were near-flawless in execution, including a particularly well-constructed soufflé that had a gorgeous golden-brown crust and puffy rise, and was just about as airy and ethereal as any I’ve had in my 20-some years of restaurant dining. —Leslie Yeh, Dining Editor 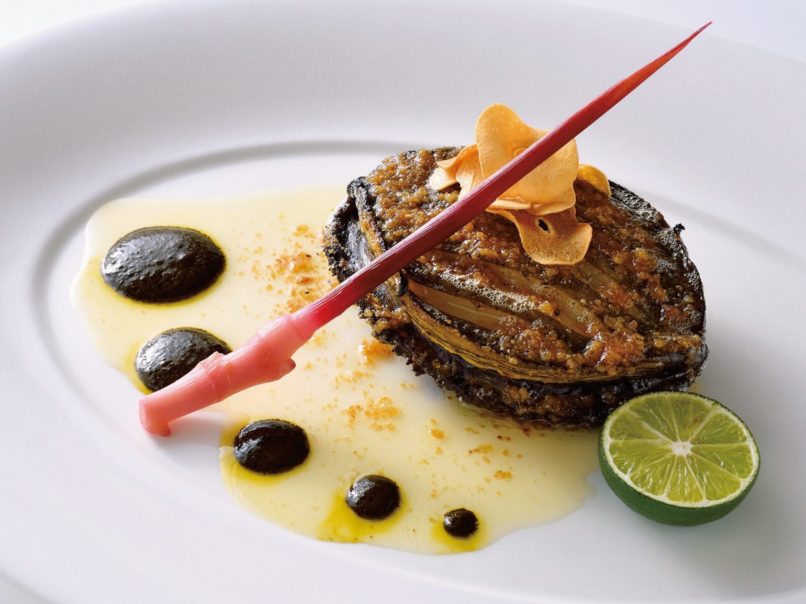 At the recent lunch presentation of world renowned Chef Nobu Matsuhisa’s newest cookbook (World of Nobu) extolling some of the unique signature dishes of each Nobu destination, we got to check out some of the highlight items from the tome, each cooked by the chefs who invented them. While we were wooed with the freshest flown in seafood, and plenty of creative renditions that made Nobu’s name in modern Japanese fare (not to mention to-die-for tender wagyu steak), the Kuro Awabi, or black abalone, was what absolutely bowled us over. Created by Chef Takashi Wada of Nobu Tokyo, this dish stole the show with the masterfully tender abalone that barely required chewing (unheard of!) thanks to its long and delicate stewing process. Then, its flavour and natural sweetness is enhanced with lemon garlic butter, drizzled on top and surrounding the plate with dollops of green abalone liver sauce. As decadent as foie gras of the sea,  the sauce pairing was so delightfully sinful our entire table was shamelessly mopping up the sauce with whatever we could. —Evelyn Lok, Associate Editor White truffles have been imparting their earthy perfume all around town since the season for the expensive delicacy kicked off earlier this autumn. Keen to get my truffle fix, I paid a visit to Takumi by Daisuke Mori — a one-Michelin-starred restaurant that quietly serves up stellar French-Japanese cuisine for 12 diners nightly from its talented namesake chef. A small dose of truffles goes a long way in elevating the aromatics of a dish, but Mori isn’t shy in shaving a palm-sized tuber liberally on everything from tagliolini to shiitake soup, to brilliant effect in the seasonal white truffle tasting menu.

While all the dishes were craveworthy, I particularly loved his white truffle ice cream, which capped off the seasonal white truffle tasting menu (HK$2,080, add-on truffle option for HK$300 per dish). Many chefs try their hand at truffle ice cream when the season rolls around but not all nail the subtle balance of flavours that’s crucial in utilising such a savoury ingredient in a sweet application. Chef Mori hits a bullseye with his version, the truffles used judiciously to enhance, but not overpower the sweetness of the ice cream, paired with a silky smooth panna cotta and autumnal fruit. —LY 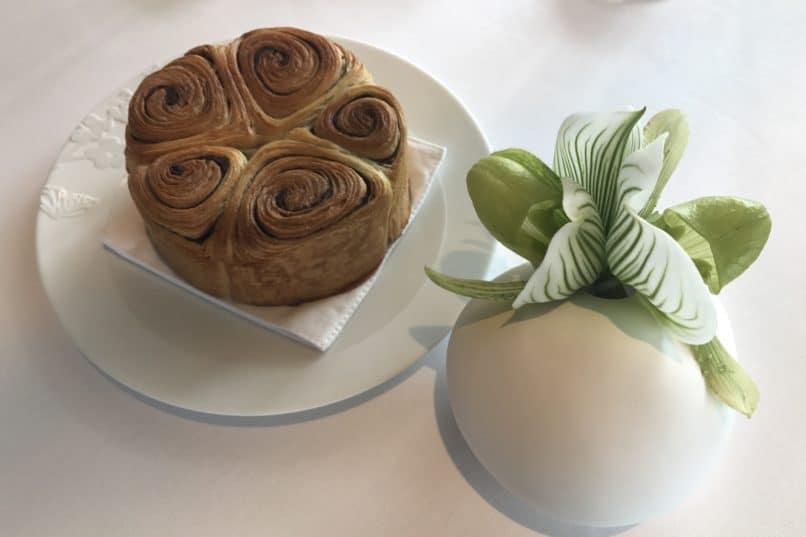 Anyone who knows me knows I’m a sucker for good bread: any hope of sticking to proteins or portion control at the dinner table pretty much flies out the window when the meal kicks off with a basket of bread, be it crackly, rustic baguettes, or soft and fluffy focaccia. While it seems almost neglectful to choose the bread course as the highlight of my meal at the two-Michelin-starred The Tasting Room in City of Dreams, Macau – now helmed by the esteemed chef Fabrice Vulin, formerly of Caprice – I can’t help but gush over this perfect olive bread that was plopped down on the table as soon as we sat down.

One look at those perfect folds of swirled pastry layers — evoking the same sense of innate satisfaction as the petals on a rose — were enough to waken my inner glutton for fine fresh-baked carbs. The bread proved to taste as irresistible as it looked, with the crunch of flaky pastry lending itself to a soft and chewy interior like the buttery folds of a fine croissant, spread through with a thin layer of olive tapenade for a satisfying savoury note. —LY 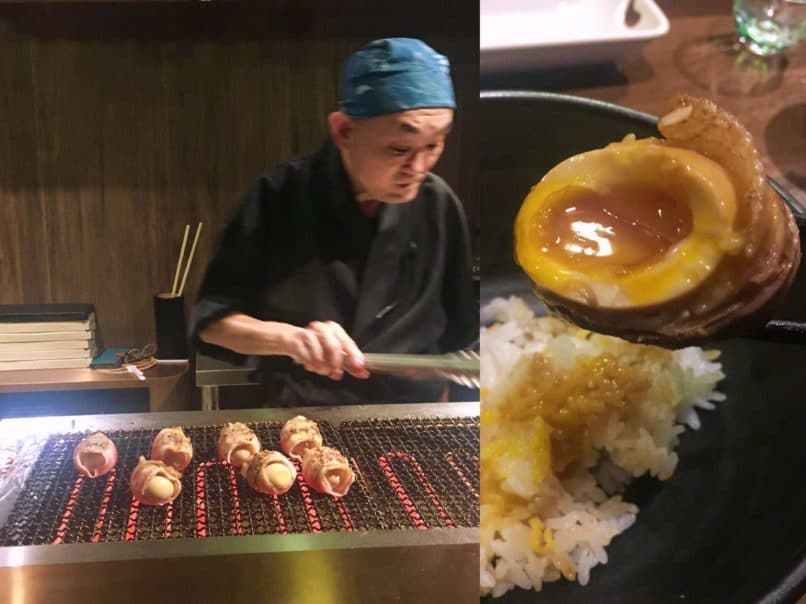 Hong Kong standards for yakitori can be extremely high, what with the prevalence of Japanese grill rooms in the city and of course our proximity to the real deal in Japan. To stand out among the rest, it’s going to take some hard convincing. At recently soft-opened Toripon, an izakaya serving late night eats next to sister beerpong bar PONG midtown next door, one of the main draws here is its yakitori omakase experience: sidle up at the bar and watch chefs at work grilling an assortment of their freshest skewers and even wagyu steak as you knock back glasses of sake — what’s not to like? Aside from the now-commonplace chicken meatball, pork belly, unagi and even chicken ventricle skewers, I was very pleased to try this unique dish that I haven’t yet seen anywhere else: perfectly soft-boiled egg marinated in a sweet, secret mirin-soy sauce blend, then wrapped in a perfectly grilled slice of bacon. You’ll want to save some rice to soak up the drippings — the simple indulgence of oozing yolk and soy sauce on warm rice is what dreams are made of. —EL 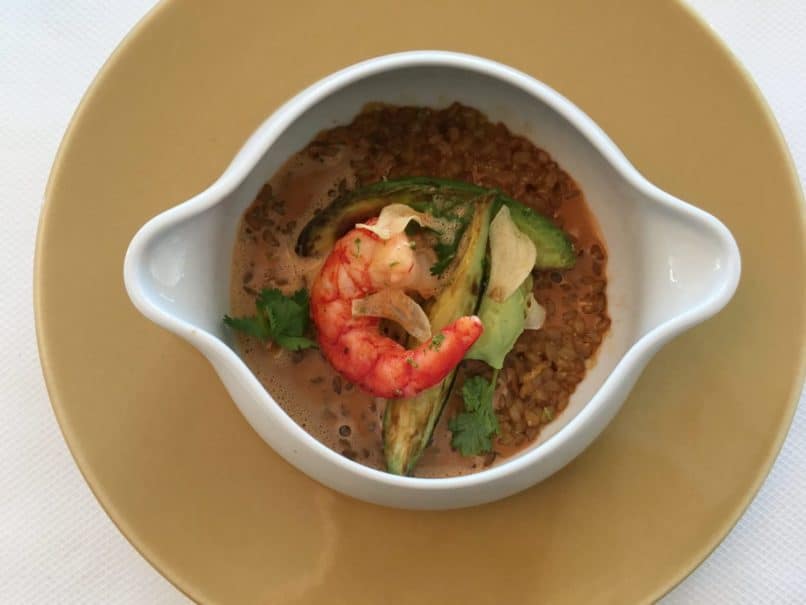 You think you’ve had great prawn paella or lobster risotto, but not until you try something like this spelt dish at Rech by Alain Ducasse: served during a one-off menu featuring produce and cooking from Chef Frédéric Garnier, from Alain Ducasse’s La Bastide de Moustiers in the heart of Aples de Haute-Provence, part of a series of dinners at Rech bringing in guest chefs from other sister Ducasse restaurants. Small spelt is an ancient indigenous grain, and while typically used in salads — you taste every round, chewy plump grain, which is then complemented by the sweetness of an intense king prawn base. The creamy richness of the dish is then further enhanced with the addition of perfectly ripe, soft avocado slices, an unexpected way to bring in additional texture and yet, paradoxically, also lightens each bite with a green tinge. —EL 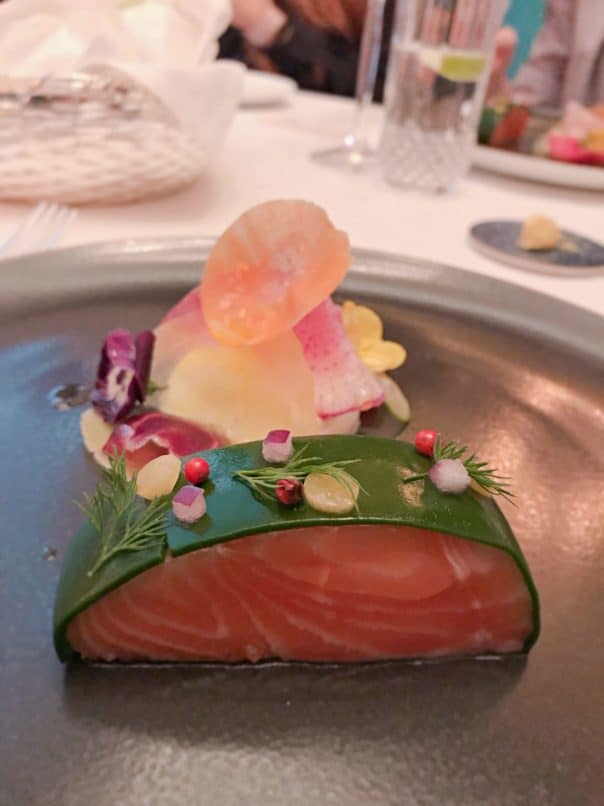 Back in 1967, Junon (named after the patron saint of the Roman Empire) was Hong Kong’s first-ever revolving restaurant, and was considered one of the few hotspots for fine dining in its heyday. After disappearing into obscurity in the 80s, it has most recently reemerged thanks to its new owner, none other than Hong Kong singer and artist Hins Cheung. A lover and collector of antiques himself, Cheung has managed to bring Junon’s time-honoured interiors to Wan Chai. While the new space looks very much like a refined time capsule from the 60s (with a stage for live performances on one end and a grand piano in the other to boot) the food is anything but old-fashioned. Junon has most recently brought in three-Michelin-starred chef Bruno Menard for the honours of designing its new menu, and among experimentation with trendy ingredients, the presentation is also absolutely intriguing. Here, I was pleasantly surprised with an uncommon trout dish, delicately plated with flower-petal-like root vegetables, dressed simply with a light touch of wasabi. It was absolutely refreshing for a midday meal — and paved the way to fully enjoy the chef’s specialty chocolate desserts and petit fours later on. —EL 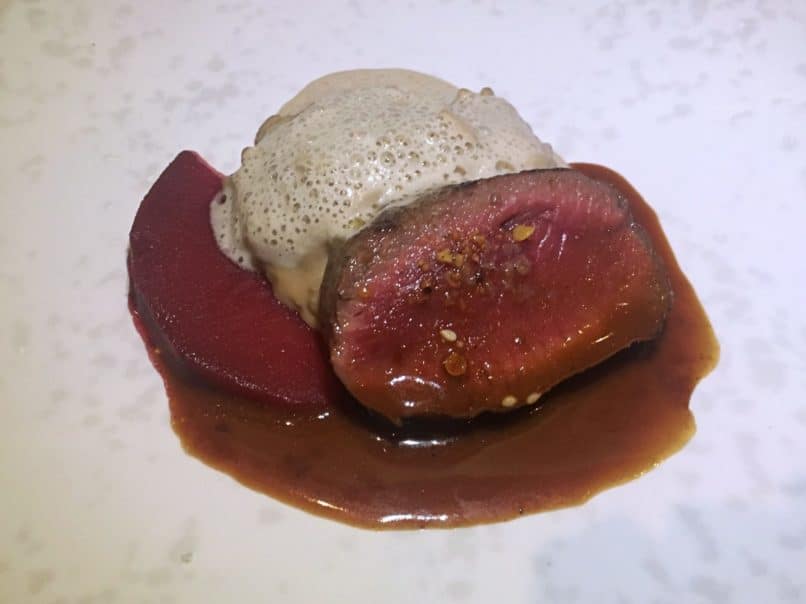 Bringing forth seasonal items such as wild game and truffle, this beautifully cooked venison at On Dining is a wonderfully satisfying main for these chilly winter evenings we’re finally starting to get in Hong Kong. Wilde fallow deer tenderloin — so soft and tender it cut almost like butter — paired spectacularly with the earthy, creaminess of cep mushroom risotto, which gained a touch of lightness topped with its frothy, airy sauce. For full enjoyment, I liked to cut into the depth of flavour by alternating bites with a burst of juicy tender pear on the side. The sauce grand veneur — or “huntsman sauce” — is a traditional pairing with large game, and was beautifully executed here with an incredible silkiness, and a deep meaty and sanguine flavour. This is a true meat-lover’s dish for sure: if you’re one who loves game, offal and intense, unctuous cuts of meat like me, you’ll want to get in on it quick. —EL

Hong Kong Dining Where to eat best bites
Leslie Yeh
Editor in Chief
Having worked as a lifestyle editor for almost 10 years, Leslie is thrilled to be writing about the topic she loves most: wining and dining. When she's not out pounding the pavement for the latest new restaurant opening or tracking food trends, Leslie can be found at home whipping up a plate of rigatoni vodka and binge-watching Netflix with a glass of Sauvignon Blanc in hand.
Dining Restaurants Food Trends Drinks Travel