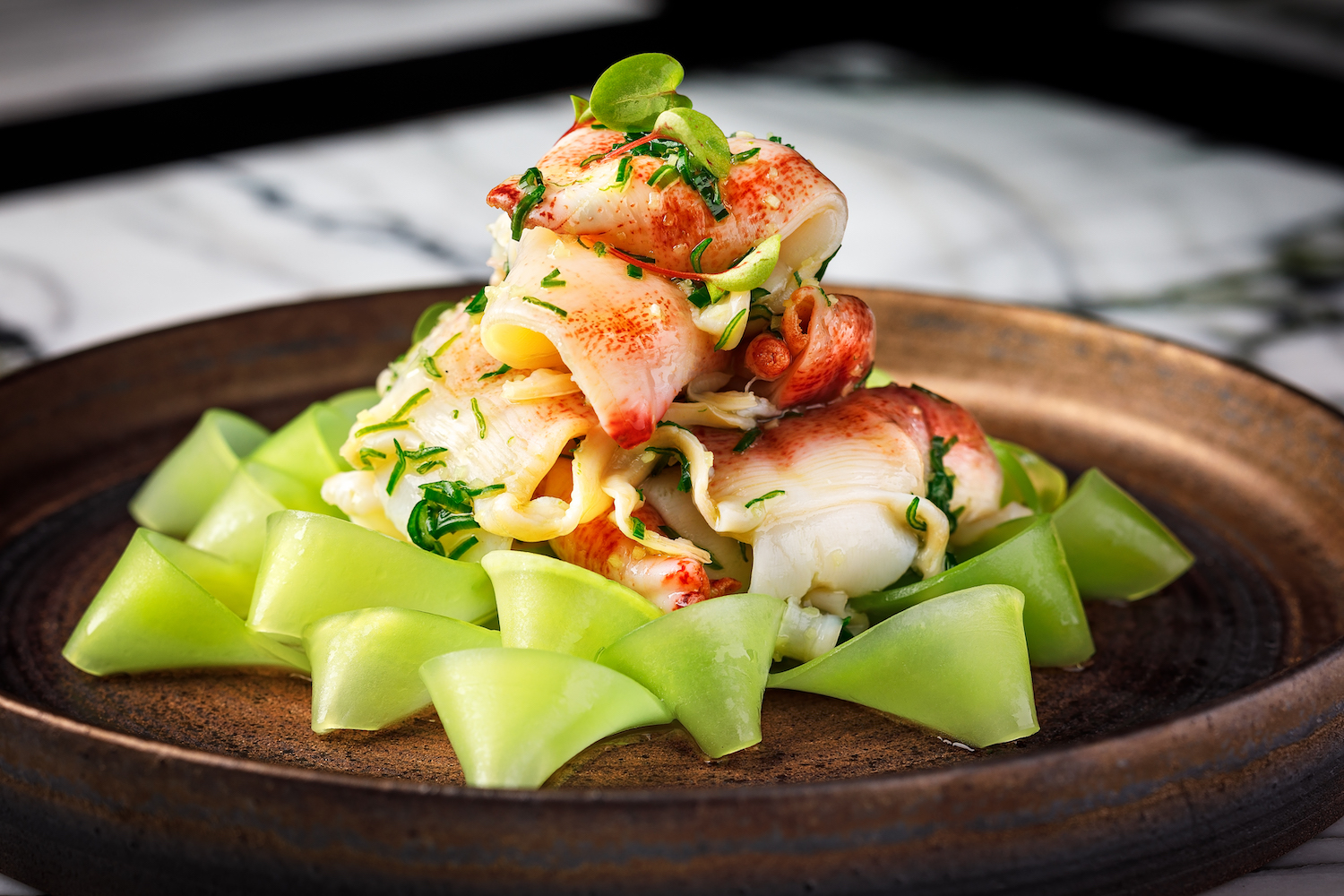 The trend for meat-free menus is on the rise, particularly in the fine-dining sphere, where proponents of the city’s green movement are pushing for a more sustainable, plant-forward future. This week, Australian chef Shane Osborn jumps on the bandwagon with an all-new vegetarian tasting menu at Arcane, showered with generous shavings of seasonal Australian black summer truffles. For more new menus around town, read ahead for this week’s new eats.

For those who haven’t yet had a chance to savour summer black truffle season, chef Shane Osborn of Michelin-starred Arcane is busy crafting an exclusive new vegetarian truffle menu in partnership with food distributor Waves Pacific. From now until the fragrant truffles disappear in late August, guests can savour the aromatic funghi shaved across a 5-course, plant-based menu showcasing the bold pairing of truffles with seasonal vegetables at their peak.

The herbivorous menu kicks off with a delicate salad of Daikoku Shimeji mushrooms and globe artichokes topped with crunchy celery, walnuts and truffle; followed by a Taiyouran egg paired with truffled borlotti bean ragout, girolles and spinach. Osborn weaves Japanese influences into the Noirmoutier potato and Japanese leek in a truffle and kombu dashi, while the savoury portion of the meal wraps up with a creamy lemon ricotta with seasonal peas, broccolini and shaved black truffle. For dessert, black truffles coax out the earthy notes in a choux puff with vanilla Chantilly, cashews and blueberries. Dishes are available à la carte or as part of a 5-course menu priced at HK$1,088 per person.

The art of Dao Yi at The Chinese Library

Fine knife cutting takes centre stage at The Chinese Library this month, as the Tai Kwun restaurant debuts five new dishes celebrating ‘Dao Yi’, or the art of the kitchen knife. Honed from more than 10 years of study and practice, chef Junno Li Zhenlong wields the simple Chinese kitchen knife to showcase a versatile range of Dao Yi recipes based on artful slicing and carving, resulting in delicate, Instagram-worthy creations.

One of the highlights on the menu is the chrysanthemum “thousand cut” silken tofu in chicken broth (HK$118); representing a flower, the auspicious dish is meant to invoke longevity, with the intricate cutting of the silken tofu taking years to master. The detoxifying broth is simmered for 24 hours and infused with crab roe for added flavour. Another refreshing palate cleanser is the marinated geoduck and jade flower (HK$168, main image above), which requires a precise cutting of the jade vegetables acting as a flowery bed for the main ingredient. Finally,  “The Golden Lion” is the pièce de résistance: deep-fried whole mandarin fish with the meat cut into thin strips while still attached to the body to resemble a golden lion’s mane. You’ll want to act fast as only four are served each day.

A Roman affair at Frank’s

One of our favourite Italian aperitivo spots in Central is getting into the spirit of summer with a new extended bar menu featuring one of Rome’s most treasured street snacks. With its convivial street-level bar, Frank’s Italian American celebrates some of Italy’s most simple and satisfying foods: this summer, it’s all about the moreish suppli, or deep-fried balls of bread-crumbed pasta stuffed with various decadent fillings.

The veal Bolognese packs the popular pasta into meatball form, fried to a golden crisp and piping hot inside; while spaghetti carbonara rests on the tried-and-true pairing of cheese, bacon and black pepper. The arabiatta elevates the humble bar snack with short rib cooked until fork-tender combined with melted house-made mozzarella. At HK$48–$58, the wallet-friendly bar snack is best chased down with a classic cocktail (try the Americano or Gibson, both priced at HK$88), paired with a spot of people-watching from the cosy semi-alfresco bar.

New Eats Arcane new menus shane osborn frank's italian black truffle menu the chinese library
Leslie Yeh
Editor in Chief
Having worked as a lifestyle editor for almost 10 years, Leslie is thrilled to be writing about the topic she loves most: wining and dining. When she's not out pounding the pavement for the latest new restaurant opening or tracking food trends, Leslie can be found at home whipping up a plate of rigatoni vodka and binge-watching Netflix with a glass of Sauvignon Blanc in hand.
Dining Restaurants Food Trends Drinks Travel