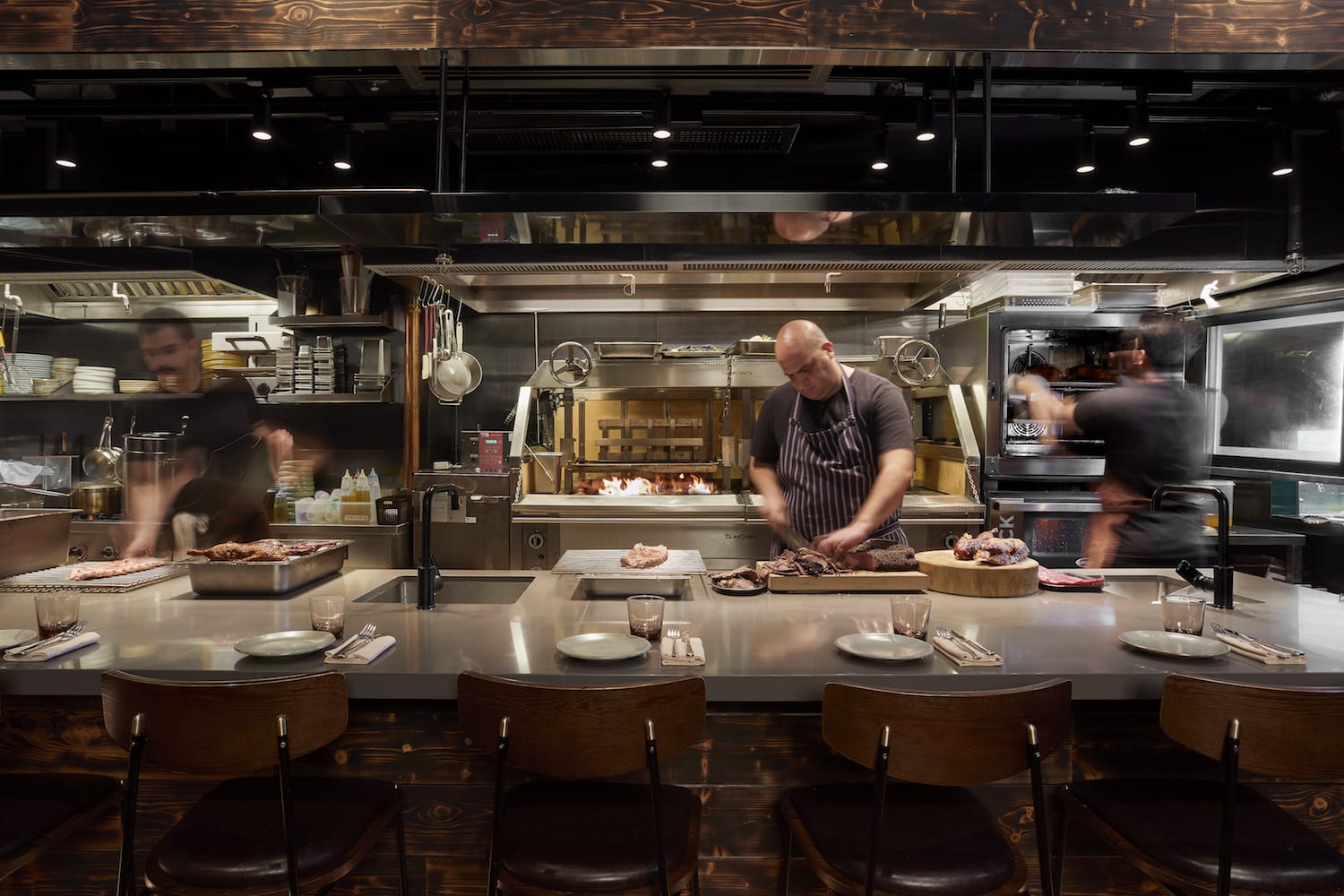 It’s not often that a newcomer to Hong Kong’s dining scene can hold its own against the established big guns: In an economy of tight margins that increasingly favours large restaurant groups with more resources, independent upstarts face an uphill battle. That’s why it’s even more commendable when places such as Francis, which was opened at the start of 2018 by three restaurant industry veterans — James Ward (front-of-house), Asher Goldstein (head chef) and Simone Sammuri (sommelier) — prove to be an exception to this rule, rising above the tide of new restaurant openings to win over a loyal crowd of regulars.

With its approachable Middle Eastern fare embracing the in-vogue ‘small plates designed for sharing’ approach, Francis easily won over the hearts and stomachs of foodies with its simple focus on food and wine without all the bells and whistles. A year after Francis’ debut, the trio have opened their sophomore venture: a smokehouse dedicated to succulent roast meats paired with creative sides and starters. Named Mr Brown, this Wan Chai newcomer is looking like another home run for the budding restaurateurs.

Mr Brown’s moniker might give off the impression of a small corner spot — like a Patty’s slice joint or a Frank’s hotdog stand — so it’s a bit of a jolt when you walk into the restaurant’s spacious digs, with its stylish downtown feel that wouldn’t feel out of place in Manhattan. While Francis wafts easily along on the breezy, open-air daytime vibes that permeate the Star Street district, Mr. Brown feels more like a dinnertime destination, a dimly lit dining room electrified by the energy coursing through the massive open kitchen, with chatter filling the air and tables littered with cocktails and carafes of wine.

The open kitchen is undoubtedly the beating heart of the space; equipped with a bespoke 2.1-metre Argentinian grill, the flames leaping up from the charcoal pit spur the raw energy and primal intoxication that’s inextricable with flame-fuelled cooking. Counter seating often means sacrificing comfort for a front-row seat of the kitchen action, but Mr Brown gives you the best of both worlds with comfortable high-backed chairs and plenty of elbow room to enjoy your food as much as the view. On the night we visited, chef Goldstein was not in the kitchen, but a quick glance at the mise on place revealed various tins of pomegranates, lemon and herbs that spoke to the Tel Aviv native’s Middle Eastern sensibilities, and we found some similar flavour profiles to Francis woven throughout the menu.

Like Francis, Mr Brown draws on a small and succinct menu of carefully composed creative starters, followed by a handful of grilled proteins: beef, lamb, pork, fish. A tightly edited list is usually a good sign that the kitchen has thought through each dish on the menu (i.e., no fillers) and with every description leaping out at us, we opt for four out of the 12 small-plate starters to share.

Portions prove to be quite manageable, starting with an order of the Iberico pork muffins (HK$70 per piece). Cut into half-moons, the English muffins (one of several homemade breads on the menu) put the crusty supermarket varieties to shame; buttery, soft and fragrant, they’re given a pass at the grill to achieve a toasty interior before getting stuffed with juicy shavings of pork, pickled cabbage and a tangy smear of mustard. We order one to share — a rookie move — and vow not to make the same mistake next time.

Our next dish of raw hamachi (HK$160) proves to be just as effective at balancing acidity and fat: Featuring thick, pearly strips of pink hamachi speckled with black pepper, the buttery richness is counteracted by a bright vinaigrette of fenugreek, lemon juice, and fennel oil. Chunks of slippery grilled avocado add a layer of lushness, while the inky leek-ash crust contributes another nuance in texture rather than any distinct flavour of its own.

The delicate handling of seafood is also apparent in the smoked and pickled mussels (HK$80), with six plump bivalves arranged around a vivid painting of bright-red roasted cherry tomatoes, charred onion petals, and micro greens in a peppery ‘nduja and tomato sauce. The process of cold-smoking the mussels adds an intriguing dimension to the dish, with the clean smoke hitting the back of the throat after the initial sweetness. Like the hamachi, the dish cleverly references the grill while keeping the flavour profile light and clean to prime your palate for larger dishes to come.

Our selection of small plates rounds off with the beef tartare, which is a technical showcase for the knife work of the kitchen. The ruby-red beef exudes a pure flavour, cut into small chunks and interspersed with a fine brunoise of celeriac, chives and olives diced so small as to be almost indistinguishable. It’s a clever reinterpretation of a steakhouse staple which eschews the typical yolk-powered richness for a cleaner play on the palate. The interplay of flavours is orchestrated well, with a base of sour cream adding notes of tang and acidity, and a shower of white truffle shavings lending an earthy intonation. Like many dishes at Mr. Brown, the portion-to-price ratio works in favour of the diner; the tartare is substantial for HK$160, and comes with a mound of wafer-thin crostini on the side for scooping.

Vegetables have unabashedly come into their own as all-star ingredients on contemporary dining menus; at Mr. Brown, they take pride of place next to the smoke-heavy meats, going one-for-one with the proteins with five options available. Often, they steal the spotlight: there’s grilled cabbage, zapped with sesame and horseradish, and smoked sweet potato scattered with crushed pecans. The sleeper hit is the kohlrabi (HK$80), a mound of aggressively charred, bite-sized bits of the root vegetable bearing the gratifying crunch of double-fried chicken, tossed with sliced almonds and topped off with the sharp bite of pecorino.

Long green peppers (HK$90) get clamped between metal grates and thrust into the red-hot flames, then placed four to a plate on a bed of smooth chickpea purée with roasted tomatoes and smoked ricotta cheese. We find some peppers to be softened and curled over from the smoke, while others could have benefitted from five more minutes or so on the grill: one particularly vicious green pepper was almost raw to the bite and scorched our tongues with its untamed seeds.

Given the quality of dishes thus far, we’re slightly let down by the main event: a 12-hour smoked beef brisket which alternates between strips of fork-tender, fat-streaked meat and tougher, chewier pieces. Made from the fat drippings of the beef, the little pot of jus is surprisingly lacking in flavour. It’s still a bargain at HK$250, but we find ourselves eagerly eyeing the half duck which goes whizzing by with its dark and glistening bark, and the thick slices of lamb neck under a ladle of bright-green tomato salsa. Given that “Mr. Brown” is Southern slang for the dark, smoky outer fringe of barbecued pork, we have a feeling that the pork ribs are also a popular order, perked up with black garlic and apple. For desserts, we polish off a monstrous slice of burnt cheesecake (HK$90) with a creaminess which melts delightfully on the tongue, offset by a tart cherry sorbet.

The drinks menu has been curated by sommelier Simone Sammuri; of the 50 small label wines, a good number falls within the affordable HK$400–$600 range. At the front of the restaurant is a bar area with squishy chocolate-coloured stools pulled up around tables for two or three — a cosy little nook for enjoying a pre- or post-prandial cocktail. Playing off the smoke theme, the Ashes to Ashes (HK$120) blends mezcal, scotch, gum syrup and activated charcoal underneath a thick cap of foam; The Roots (HK$120) puts a tropical spin on the smoky agave spirit with a splash of citrus grapefruit and ginger beer.

To take a quick trip down memory lane, Mr Brown in fact at times reminds us a bit of Rhoda (RIP) — JIA Group’s Sai Ying Pun smokehouse which closed prematurely last September — with its industrial-style décor, open kitchen and formal of small plates plus grilled meats. While Rhoda seemed at times preoccupied with being the trendy, “it” restaurant of the neighbourhood (in case the Joyce Wang-designed interiors and upscale prices didn’t give it away), Mr. Brown taps into a more humble approach, driven by the care-free spirit of its founders and their mission: creating democratic neighbourhood restaurants fuelled by fun vibes and free of pretension.

Servers here are perhaps not overtly friendly, but oddly the casual indifference could be seen as a barometer of the changing attitudes of the dining room: Put simply, there’s no pandering to VIP guests, no costumes or gimmicks, and no overly enthusiastic wait staff trained to play a certain character or role. That in itself can be refreshing given the city’s long-held obsession with theatrical, concept-driven restaurants. Mr Brown is simply a good place to eat — a neighbourhood spot to enjoy delicious food and wine without stipulations or showy tendencies. It’s this MO that landed Francis on our Best New Restaurants of 2018 list, and is likely to pave the path for success for the Ship Street smokehouse in coming months.

New Restaurants Dining Restaurant Review Hong Kong Dining Reviews new openings Francis wan chai restaurants mr. brown
Leslie Yeh
Editor in Chief
Having worked as a lifestyle editor for almost 10 years, Leslie is thrilled to be writing about the topic she loves most: wining and dining. When she's not out pounding the pavement for the latest new restaurant opening or tracking food trends, Leslie can be found at home whipping up a plate of rigatoni vodka and binge-watching Netflix with a glass of Sauvignon Blanc in hand.
Dining Restaurants Food Trends Drinks Travel