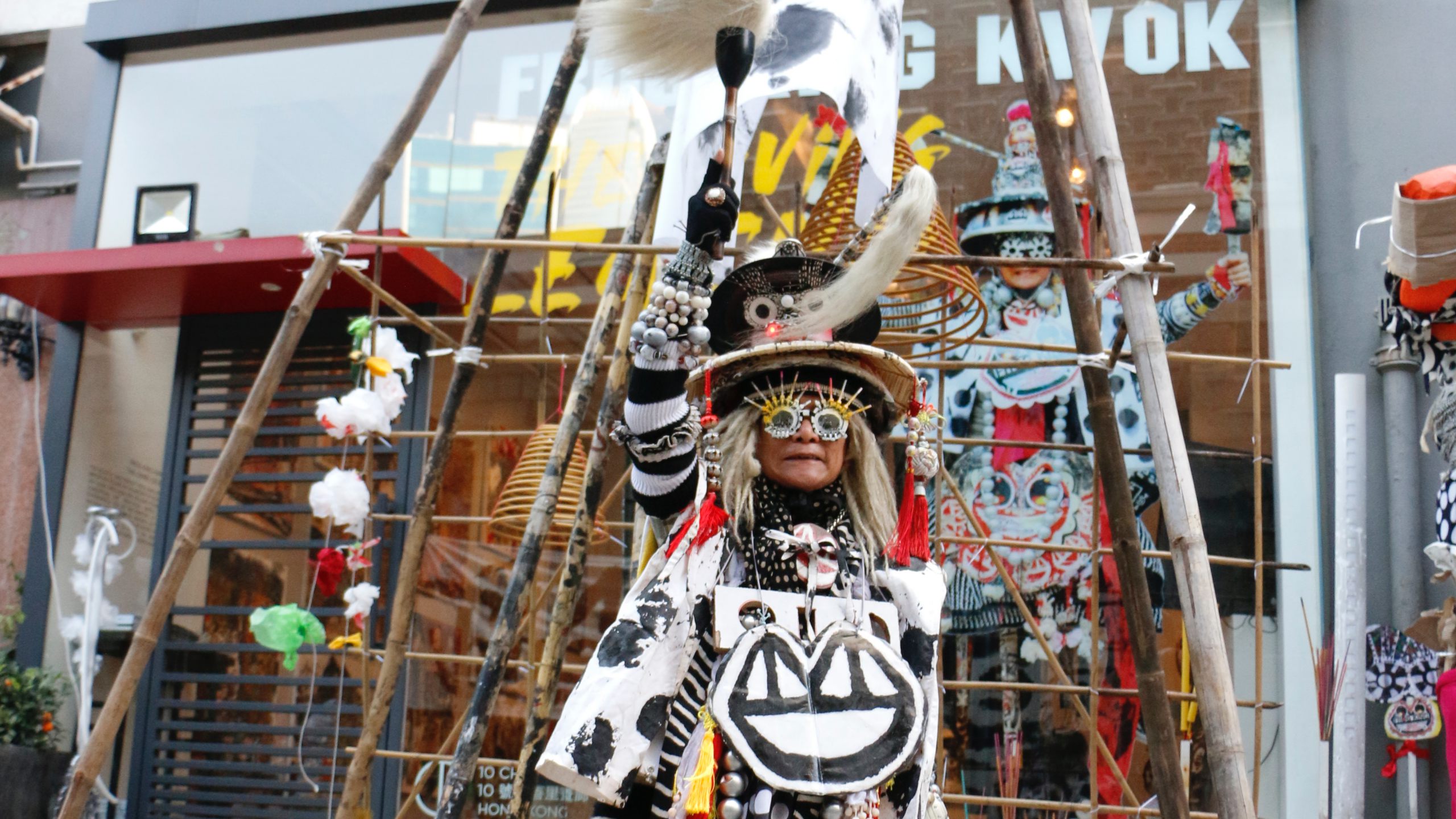 Hong Kong is a place brimming with talented and intriguing people. In our weekly 27 Questions column, we get up close and personal with the city’s notable personalities, learning about their whims and aversions, pivotal life moments, and hopes and dreams — all in roughly the same amount of time it takes to sit through a two-minute speed date.

Donning a full regalia comprised of layers of painted clothing, wigs, flashing lights, jewellery, a homemade sceptre, mantle and crown, as well as his unmissable Froggy Sunglasses, Frog King is often referred to as the most eccentric and outlandish artist in Hong Kong. In his 30s and 40s, he spent 15 years pursuing art in New York, before returning to Hong Kong where he was awarded the Hong Kong Arts Development Council Emeritus Fellowship in 1998. In 2001, he started the Frog King Kwok Museum at the Cattle Depot Artist Village in To Kwa Wan. In 2011, he was selected as Hong Kong’s representative for the 54th Venice Biennale.

Born Kwok Mang-ho, the artist is recognised internationally for his frog insignia and whimsical mixed-media art, spanning modes of painting, sculpture and installation, and his artistic style that emerged in the 1980s when he lived in New York’s East Village, influenced by the city’s leading artist personas such as Keith Haring, Basquiat and Warhol.

Kwok is classically trained in ink painting and calligraphy by the late New Ink master Lui Shou-kwan, who encouraged him to break from tradition and pushed him to bring his now-iconic performance and conceptual art to fruition. Since 1967, Frog King has combined English and Chinese calligraphy, bold expressive splashes and strokes as well as everyday objects into his mixed-media art, aiming to spread his cheerful ethos of ‘Art is life, and Life is Frog’ into any room his persona enters.

Blurring the line between real life and artist performances, Kwok’s anticipated happenings are all about audience engagement, where he makes it a point to spread joy and positivity amongst the crowds. Waving his toilet plunger and ink brush sceptre, he encourages typically stern gallery goers to crack a smile through his playful movements and nonsensical chants. He also instigates photo ops where viewers get to wear his handmade Froggy Sunglasses and become a part of the Frog King universe. Notable figures such as David Bowie and Nam June Paik have also made appearances donning the signature sunglasses in Frog King’s extensive photo catalogue.

Represented by 10 Chancery Lane Gallery, Frog King is currently exhibiting a solo show of brand new works at the gallery through 12 January, 2020, where he has debuted a performance entitled ‘Smoke of Change’. Fans can also look forward to seeing a major installation at the relaunch of the Hong Kong Museum of Art at the end of this year. In the midst of the artist’s busy autumn agenda, we spend a few candid minutes with Kwok to learn more about the man behind the Froggy Sunglasses.

1. What is your life motto?

2. What is the best meal you’ve ever eaten in Hong Kong?

The painting teacher I had when I was in kindergarten.

4. What is your drink of choice?

5. What is the best thing in or about your apartment?

The big yard of my apartment in Yuen Long where I can do crazy behavioural performances.

6. Are you a morning person or a night owl?

7. If you could only eat one thing for the rest of your life, what would it be?

8. What is your biggest regret in life?

When I was five years old, I lit a firecracker but didn’t throw it away as it burned — it exploded on my hand so badly that I was sent to the hospital. I should have thrown it away but at that moment I was just so curious how it would look exploded onto my hand.

9. What is the top destination on your bucket list?

I want to finish my Froggy Museum in South Korea.

10. What is your greatest fear?

That I won’t be able to make art anymore.

11. When did you last ride the Star Ferry? What were you doing/where did you go?

12. What is your biggest guilty pleasure?

When I forgot to wear a condom with my ex-girlfriend in Japan.

13. What is one movie everyone should see?

‘One Flew Over the Cuckoo’s Nest’.

15. Which moment in your life would you most like to relive?

Living by the sea on Jeju Island with my wife.

16. What makes someone a real Hongkonger?

Knowing the balance of being Chinese and a Hongkonger.

I go up to Kowloon Peak (Fei Ngo Shan) to see the wild lily flowers.

18. If you had to describe Hong Kong in one word, what would it be?

The first time I made a kite with old newspapers and flew it from the rooftop of my house.

20. What is one thing you’ve never revealed to your parents?

I never brought my first girlfriend to see my parents.

21. What is your favourite scent in the whole world?

The smell of my ex-girlfriend’s bikini part, when I was in my 40s in New York.

22. Who is the best teacher you’ve ever had, what is one important lesson that they taught you?

Lui Shou-kwan, who taught me the lessons of Taoism and Lao Tzu.

23. Have you ever experienced love at first sight?

24. Do you have any favourite tattoos or special birthmarks? What is it?

In the 1970s, I accidentally left a black mark on my right hand using an ink pencil.

25. How many pairs of shoes do you currently own? Which do you wear the most often?

Two pairs: one pair of rubber slippers, another pair of sandals.

26. How many countries have you been to?

I’ve travelled half the world.

27. What is the last dream you remember waking up to?

I dreamt that I was living under the deep sea, seeing all the colourful fish.

27 Questions: Beckaly Franks, bartender and co-owner of The Pontiac and The Pontiac Stardust