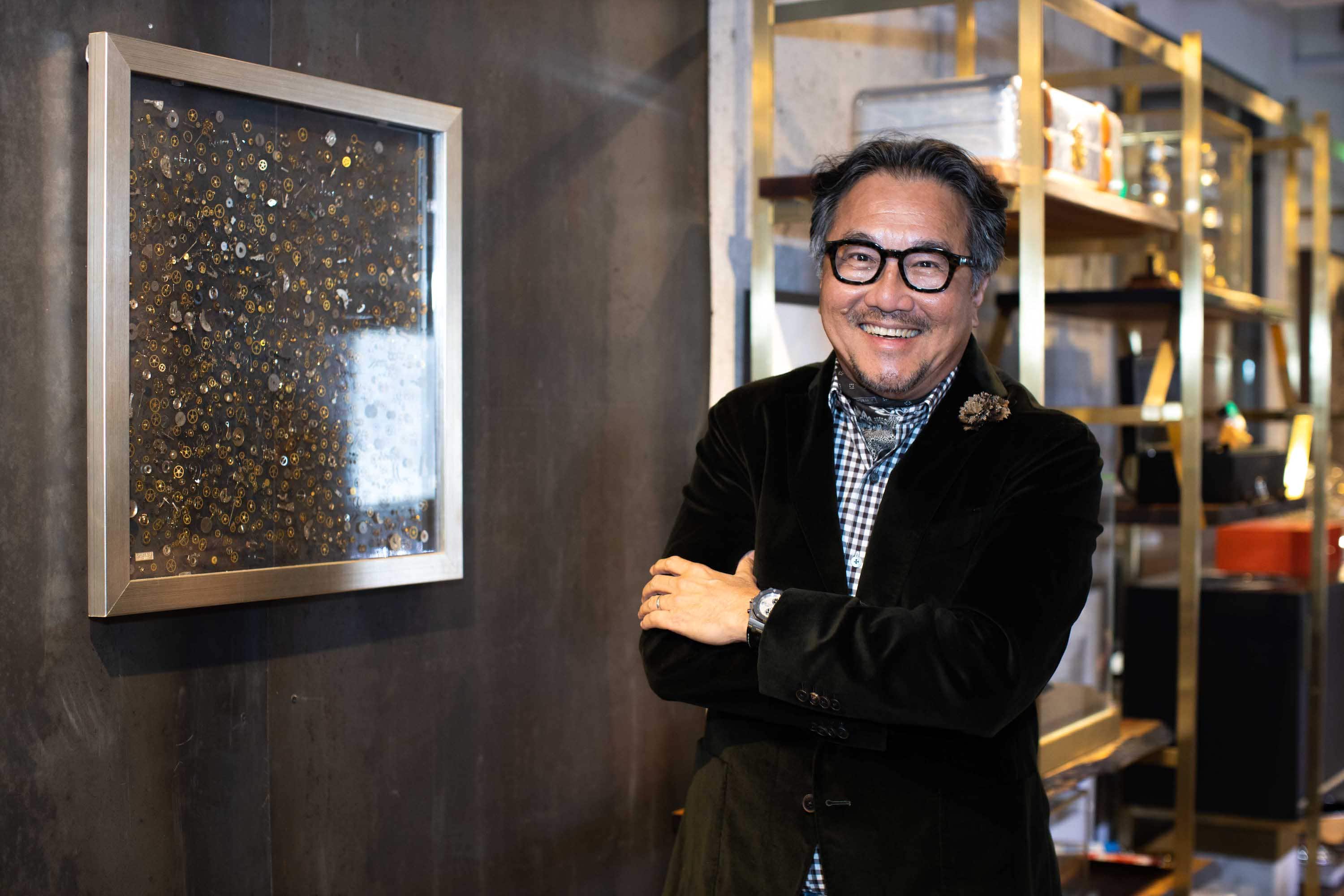 In Wrist Watch — our monthly column dedicated to watches in the wild and the interesting individuals who wear them — resident horology enthusiast Randy Lai highlights key finds each exhibiting some aspect of excellence (e.g., craft, collectability, cultural significance). This Christmas, tot of eggnog in hand, Randy stopped by Watchbox to talk to the business’s co-founder and elder statesman — Mr. Tay Liam Wee.

When it comes to fine Swiss watches, it’s a statistical fact that Asia is the industry’s golden calf. Known for diverse buying patterns and an unassailable market share — the Swiss Watch Federation estimates 52.9 percent of the country’s timepieces are exported to retailers in Asia — consumers in Hong Kong, Japan and (in more recent years) mainland China have been key to growing the Swiss watch industry abroad. Much of that’s down to gentlemen like Tay Liam Wee — Chairman of Watchbox and the star of our very merry holiday edition of Wrist Watch. It’s no exaggeration to say that the watch business is in Wee’s blood: A managing director at Sincere Watch Ltd since 1993, he took his “modest little family business with an annual turnover of SG$8 million” and transformed it into a pan-Asian behemoth. By the time that Sincere was sold — a deal which indirectly drew the backing of LVMH ‘s regional investment arm — the company was valued at US$186 million. (Wee had already taken the company public prior to selling, getting it listed in both the HKSAR and his native Singapore.)

Having worked in the watch industry for over three decades, it’s no surprise that Wee is widely credited as one of Asia’s leading collectors. Earlier this month, during our visit to Watchbox HQ, it quickly became apparent that many of his career highlights are immortalised in timepieces that he wears on a daily basis. Naturally, it would be impossible to catalogue the hundreds of watches Wee has owned over the course of his career in just a few hundred words. However, he was gracious enough to share with us a few key highlights from his tenure at Sincere Watch: a 30-year long period that, in many ways, charts the trajectory of the international luxury watch industry. “These are all essentially watches that are meaningful to me,” said Wee, “those which were integral to the first part of my career”. And boy oh boy, as you’re about to see below, that career is nothing short of exceptional.

Part of a limited run of 50 pieces, this Royal Oak Offshore was produced to commemorate the 50th anniversary of Sincere Watch. Unlike most contemporary limited editions, the design of this 42mm chronograph was heavily influenced by Wee and his team at Sincere. “I worked really closely with Audemars Piguet,” said Wee. “At that time, we were at the forefront of the creative process. If you look at the watch industry nowadays, the brands have more or less taken full control — from conception all the way to point of distribution. But at the time we created this, it was unique”. A collaborative dialogue resulted in some interesting details: such as the combination of steel case and Tantalum bezel. “Today, if you Google this particular watch, the prices being offered for it by major auction houses like Sotheby’s demonstrate it has maintained strong collectability on the secondary market,” said Wee.

Although Wee has sold timepieces from a wide array of brands (big and small) over the years, he’s particularly fond of independent watchmakers specialising in complications. This Franck Muller Master Banker — a tonneau-shaped design capable of simultaneously displaying three timezones — was reportedly developed following the Genevan watchmaker’s introduction to the Asia market. “I brought Franck Muller to Asia in 1992,” said Wee, “and not unlike the early Silicon Valley guys, he started his watchmaking atelier in a kitchen.” Home office aesthetic aside, this particular timepiece solidified Muller’s reputation as the “King of complications”, particularly amongst the Master Banker’s namesake demographic. “When you think about this whole watch in systematic terms,” said Wee, “it uses a single calibre to adjust three different timezones. Of course, multiple timezones can easily be displayed using quartz and digital technology — that’s not a big deal. But [in 1996] short of wearing two watches, it wasn’t something that was commonly available in the context of haute horlogerie.” Again the product of a collaborative discussion between Muller and Wee, the Master Banker was supposed to address the very particular needs of the latter’s investment banker clients — all within a thin, elegantly contoured 36mm package.

Considered something of a unicorn within the A. Lange & Söhne lineup, the Cabaret had a short-lived history that ultimately saw it discontinued in 2011. Wee’s association with Lange actually predates the production of this watch — he’d already approached them about distribution in Asia following the reunification of East and West Germany — but he continued to retail the brand’s watches even after they were acquired by Richemont in 2000. Thankfully, Lange’s transition into a subsidiary didn’t affect quality, with their releases still evincing the highest standards of finishing, mechanics and design. “I remember that when I introduced the Cabaret to the market,” said Wee, “one of our first customers was an elderly gentleman from the Shaw family. He’d never heard of A. Lange & Söhne before but knew immediately that he wanted to buy this watch because it was the first one on which he could actually see the date!” According to Wee, when the Cabarets were first offered by Sincere Watch they were “priced higher than entry-level Patek Philippe” — an indication of how confident the company was in their movability. “The whole watch is just very functional,” said Wee. “All the elements are clean and emphatically un-fancy — very German. If you compare that to the overarching style of the Swiss watchmakers, a lot of the latter were influenced by French artistic movements, generally making a much softer less industrial style.”

Most enthusiasts will be familiar with F.P. Journe as a result of the brand’s highly distinctive Chronomètre Résonance — a dual timezone watch which expresses François-Paul’s zany French influence on the dial. Although all Journe timepieces are limited by nature — it’s estimated the Geneva manufacture makes only 700 pieces a year — Wee’s poison of choice, the Tourbillon Souverain, is among the rarest. One of only two exemplars ever made, the Souvetain is equipped with a remontoire and exudes an arresting combination of black mother of pearl on platinum. Yes, your eyes don’t deceive you — the dial is crafted from a single piece of mother of pearl. “[It’s] extremely delicate” said Wee, “to do a dial and movement on a material like this, but in spite of the cost — François-Paul must have broken dozens of these individual mother of pearl pieces — I think he enjoyed the challenge!”

Among the most iconic Rolexes ever produced, every generation of watch enthusiast is bound to encounter a period-specific version of the Day-Date President. According to Wee, when he was first getting started in the watch business during the 1980s, this iteration (featuring a full yellow gold construction, diamond markers and sunburst blue dial) was all the rage. “When I first started off and was learning the ropes of the watch business, this is what the words “Rolex President” meant to me. Usually, heavily embellished watches aren’t really my style, but in this case I think the diamond indexes add a nice contrast to the deep and incandescent blue of the dial — it’s a very elegant way of representing classic watchmaking from the 80s.”

All images courtesy of Annie Yuen.