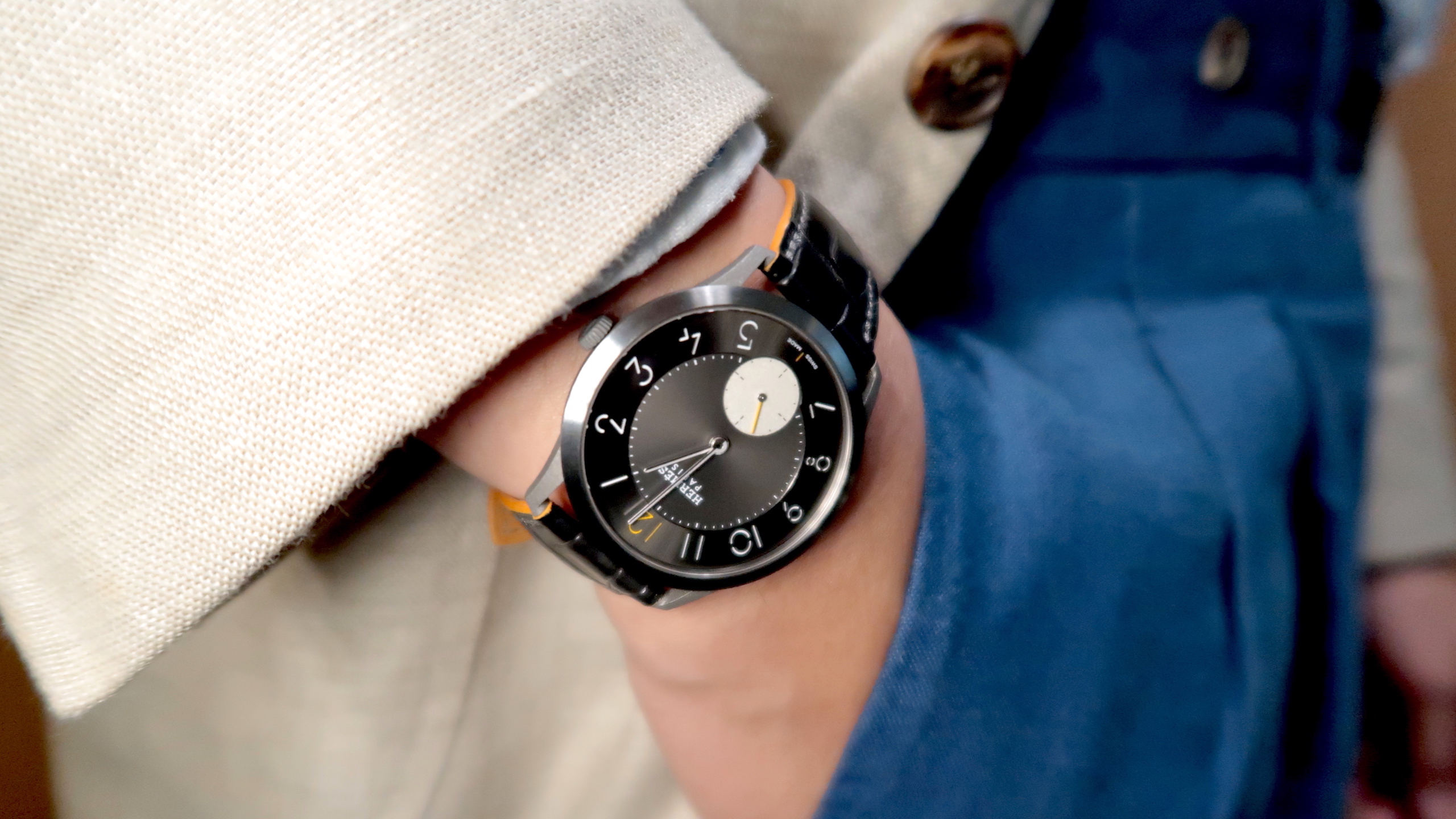 Hi-res images and press previews are one thing, but to truly understand what makes a great watch tick, you need to grasp it in the metal. That’s the impetus behind ‘Wristy Business’: a new column in which resident watch hobbyist Randy Lai reviews the latest releases from our favourite brands. From time-only pieces to calendar chronographs, we take watches out of their hermetically sealed environment and into the wild — all whilst contemplating what makes them a great fit for your wrist.

In the short span of time that I’ve been writing about watches, the term ‘fashion watch’ has gotten thrown around a lot. It’s usually employed as a (winkingly derisive) catch-all — to describe a particular product vertical that makes up the bulk of what is actually sold in this industry. Mass produced, fitted with a sourced movement (sometimes quartz) and conspicuously trendy, fashion watches are anathema to many ‘serious’ collectors.

It’d be disingenuous to say Hermès has never made such things: after all, the Parisian leather specialist has extremely lucrative branding at its disposal; and — like most of the competition — had to expand into a product segment outside its area of historic expertise over the past few years. Consequently, the Slim d’Hermès Titane does embody some of those criticisms, commonly levelled at fashion timepieces, but that’s by association rather than design.

At any rate, what Hermès have come up with isn’t so much a fashion accessory as it is a design object — and the latter is a medium in which the brand excels. Mechanically identical to its stainless steel predecessor (launched in 2015), this is a cleanly detailed lightweight dress watch that straddles the divide between casual and formal wear. It’s also the sort of curio that can be enjoyed on multiple different levels: beyond compelling aesthetic queues, there’s dynamic use of proportion; and the mechanics (whilst derivative) demonstrate that Hermès is in it for the long haul when it comes to honing competencies in in-house watchmaking.

A deep concern for intelligent design is what sets Hermès apart from other fashion houses that have gotten into watchmaking. When you look through the various collections, you’ll see each has a discrete visual signature. For the Galop, that is the stirrup-shaped lug; for the Cape Cod, intersecting geometries; and in the case of the Slim d’Hermès, we’re talking about the indexes. The font for these was contributed by Philippe Apeloig — a French typographer who’s endemic of the sort of industry giant that only Hermès seem capable of enlisting.

Apeloig mightn’t be a name which is immediately familiar to the general public, but those with even a perfunctory interest in graphic design are likely to have come across his work. It’s impossible to list all his credentials, but the one-time artistic director of The Louvre has created typefaces for Ralph Lauren, Issey Miyake and, in 2017, was tapped to design the logo for the YSL Museum in Marrakech. Although Apeloig’s artistic practice exists primarily in a 2D medium, his work is beloved for its mesmeric improbably three-dimensional quality, which is heavily influenced by painters and illustrators associated with the modernist movement. This style, which balances depth and fullness, light and shadow — but never at the expense of being legible — aligns nicely with the goals which Hermès watchmakers always take into account when designing timepieces.

It’d be one thing to commission a custom typeface and then just slap it across the dial, but the context in which Hermès watchmakers have situated Apeloig’s work indicates fluency in collaborative design. In other words: the dial execution accentuates the typeface’s innate charm, whilst still offering plenty in the way of its own distinctive (not to mention complementary) visual interest.

A unique depth effect, whereby each numeral appears to float off the dial, is achieved by layering a cut-out chapter ring onto the larger base. The latter is decorated with Apeloig’s typeface (applied via a pad printing process) and an extremely fine radial motif. For contrast, the small seconds sub-dial is micro-blasted — to my eye, the effect is something akin to mother of pearl — with the brand’s signature Pantone No. 1448 orange used to illuminate the seconds hand, and 12 and 6 o’clock indexes.

In conjunction with a subtle tone-on-tone treatment — the chapter ring is a marginally darker shade of anthracite than the rest of the dial — wearers are given a display that possesses fantastic legibility, without skimping on the spectrum of depth, light and motion that’s characteristic of all watches across this collection. The dial certainly isn’t the only thing to love, but the way in which it holds your attention and captures Apeloig’s whimsical, tactile illustration style means that it’s the feature most likely to stay with you long after you’ve taken the Slim d’Hermès Titane off your wrist.

A first for the Slim d’Hermès collection

The titanium case is the distinguishing factor between this year’s Slim d’Hermès Titane and the original. Moving away from stainless steel has had a marked impact on the watch’s general aesthetic: whereas the 2015 model evinced an elegant monochromatic design (which occasionally bordered on austere), the titanium version is sportier, more audacious and in my opinion truer to the spirit we all associate with Hermès. Thanks to the construction, it’s also extremely comfortable: even by my personal standards — I usually wear a 36mm three-hander in stainless steel — this is light, though what the titanium lacks in weight it makes up for in sheer wrist presence.

On the flanks you can observe two finishes: the mid-case and lugs are micro-blasted similarly to the small seconds; while the bezel features circular brushing that runs perpendicular to the radial pattern on the dial. The juxtaposition between grained and smooth surfaces is an efficient way to add visual interest, without having to resort to contrasting metals or jewellery. The overall effect is seamless, save for the solder where the lugs join the mid-case — in an ideal world this would be replaced with a less obvious weld, thereby preserving the otherwise continuous curvature of the casework.

Fortunately, the sizing of those lugs (along with the rest of the case) is identical to what Hermès has used since 2015. At 39.5mm, the Slim d’Hermès Titane falls squarely into the populist sizing bracket: making it capable of wear not only as a dress watch (in part due to the thin 9.06mm case) but also a more casual everyday piece. The lugs feature a slight curvature which helps the watch to sit comfortably, though those with smaller than average wrists (i.e. below 6.5 inches) are unlikely to benefit, as the proportions are already skewed in favour of width. Having said that, the reality is that most men’s wrists measure around 6.75 inches, so there’s ample reason for Hermès to stick with this tried-and-true sizing.

What’s more, the 39.5mm format confers a number of other benefits. For starters, there’s a larger surface area upon which to enjoy Apeloig’s numerals — which is essential, given the segmented and cursive style in which they’re drawn. The plate-like proportions are also extremely popular amongst a growing segment of female buyers who go in for something oversized; and it’s easy to imagine that Hermès were fully aware of this when working out the proportions. Simply put, the sizing has been optimised for unisex wear and, in that sense, offers a compelling value proposition to the sort of man who enjoys swapping watches with his significant other.

At the top of this review, I said you wouldn’t be wrong to call the new Slim d’Hermès a ‘fashion watch’. On the one hand, it’s a rehash of an existing design, trading on unremarkable mechanics and a universally recognisable brand (it’s even in the strap for Christ’s sake). But allowing that association with Hermès, the fashion house, to detract from the work its watchmaking division (Montres Hermès) has been doing feels trite and overly simplistic. The Slim d’Hermès Titane is at the core of an emerging design language at Montres Hermès and — unlike a lot of fashion watches that are indeed superfluous — clarifies the best aspects of the original.

The act of wearing this watch is pleasurable: it’s light, discreet, and in the grand tradition of Hermès, never takes itself too seriously. The design aspect — guaranteed to offer particular resonance to those interested in the decorative arts — can be enjoyed on any level, as much an exercise in sensory enjoyment as it is a display of Hermès’s prowess in object design. Let’s see a Kickstarter watch do all that.