Apple’s double decade reign goes almost full circle as Korean designer Yeonsoo Kang gives the Apple watch a brand-new feature. Designed to evoke the body of the original 2001 iPod, the non-functional case designed by Kang makes for interesting Apple collector’s gear. This nostalgic affair is in collaboration with Caseology and the silicon case makes for the iPod’s mimic screen. The Apple watch slips right in allowing its crown to be displayed as well with a rounded window panel to the screen’s right. In comparison with the original iPod, the 2018 version does seem a bit smaller as the original was a larger and came with a click wheel that’s double the size of this one. The classic 2-point audio jack have been replaced with Apple AirPods, adding to its charm. Dubbed as the ‘Pod’, this one is currently in its concept phase and will most likely be launched in 2019. The sliding wheel is unfortunately non-functional, but maybe a device-case Bluetooth sync might actually be a cool addition, if Apple were to consider it. Until then, you’ll have to make do with the Apple Watch’s touchscreen, which is considerably convenient. The case also has cut outs for the Apple Watch’s digital crown, side buttons, and the back, so you can still charge your watch wirelessly while it’s housed in the case. 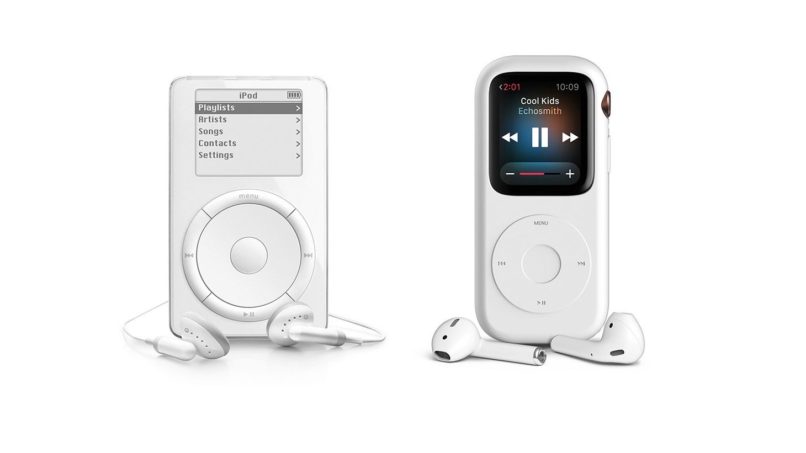 While they take a nostalgic swing at the iPod, having a case like this with the efficiency of an Apple Watch and iPhone support, would be nothing short of brilliance. The case collection is said to come in three fun colours: White, navy and peach.

The current official verdict is that the Pod is coming ‘soon’ but there’s no precise date on their calendar as to when. We’d like to think they’ll remodel the case and transform it into a functional piece of Apple memorabilia. Would that be too much to ask?