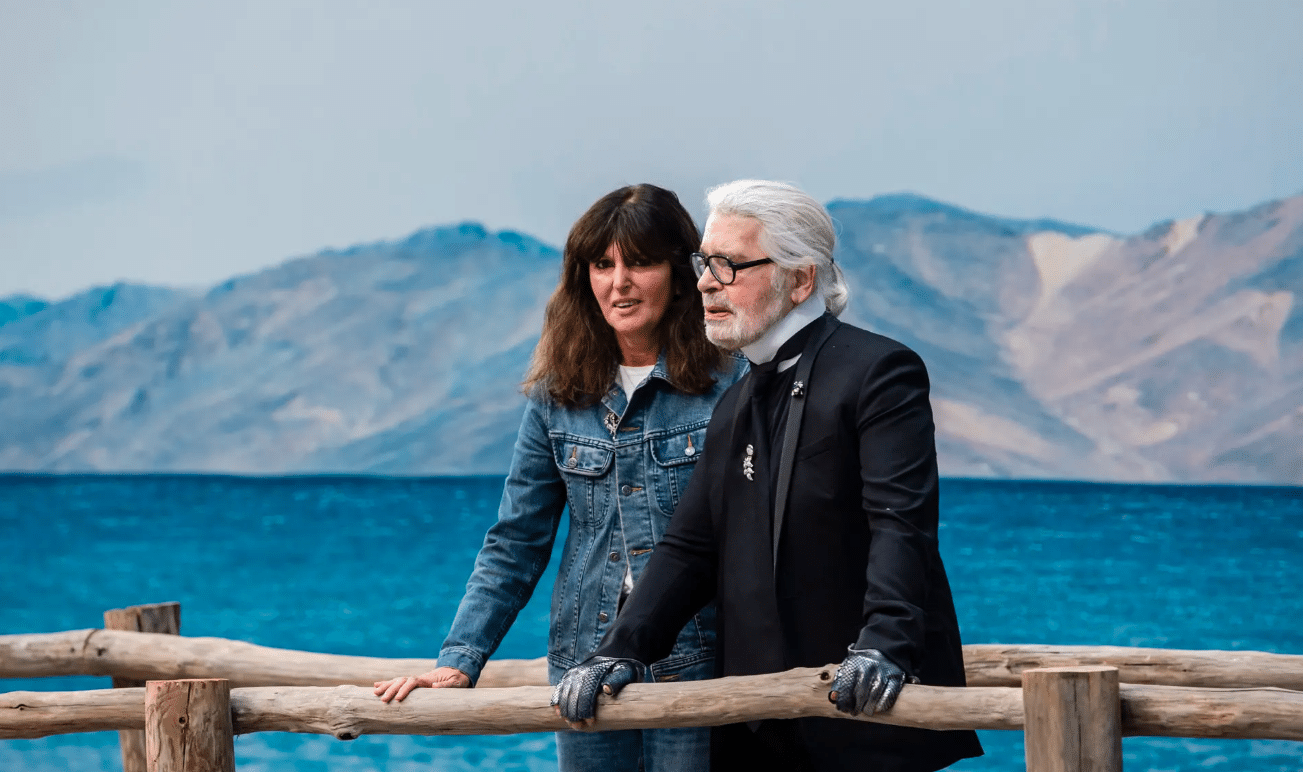 Everything you must know about Virginie Viard, Karl Lagerfeld’s successor at Chanel

Style
Everything you must know about Virginie Viard, Karl Lagerfeld’s successor at Chanel
Share this article
Next article

Karl Lagerfeld passed away at the age of 85 in Paris on 19th February 2019 and very quickly, French fashion house Chanel announced the appointment of his successor on Instagram as if the contingency plan was drafted way before the death of the Kaiser.

It is with deep sadness that the House of CHANEL announces the passing of Karl Lagerfeld, the Creative Director for the CHANEL Fashion House since 1983. An extraordinary creative individual, Karl Lagerfeld reinvented the brand’s codes created by Gabrielle Chanel: the CHANEL jacket and suit, the little black dress, the precious tweeds, the two-tone shoes, the quilted handbags, the pearls and costume jewelry. Regarding Gabrielle Chanel, he said, “My job is not to do what she did, but what she would have done. The good thing about Chanel is it is an idea you can adapt to many things.” A prolific creative mind with endless imagination, Karl Lagerfeld explored many artistic horizons, including photography and short films. The House of CHANEL benefited from his talent for all the branding campaigns related to Fashion since 1987. Finally, one cannot refer to Karl Lagerfeld without mentioning his innate sense of repartee and self-mockery. Alain Wertheimer, CEO of CHANEL, said: “Thanks to his creative genius, generosity and exceptional intuition, Karl Lagerfeld was ahead of his time, which widely contributed to the House of CHANEL’s success throughout the world. Today, not only have I lost a friend, but we have all lost an extraordinary creative mind to whom I gave carte blanche in the early 1980s to reinvent the brand.” Bruno Pavlovsky, President of Fashion at CHANEL, said: “Fashion show after fashion show, collection after collection, Karl Lagerfeld left his mark on the legend of Gabrielle Chanel and the history of the House of CHANEL. He steadfastly promoted the talent and expertise of CHANEL’s ateliers and Métiers d’Art, allowing this exceptional know-how to shine throughout the world. The greatest tribute we can pay today is to continue to follow the path he traced by – to quote Karl – ‘continuing to embrace the present and invent the future’.” Virginie Viard, Director of CHANEL’s Fashion Creation Studio and Karl Lagerfeld’s closest collaborator for more than 30 years, has been entrusted by Alain Wertheimer with the creative work for the collections, so that the legacy of Gabrielle Chanel and Karl Lagerfeld can live on.

Meet Virginie Viard. The director of Chanel’s Fashion Creation Studio and Lagerfeld’s right-hand for over 30 years has taken over as the creative lead of the brand – continuing the historic legacy of Gabrielle Chanel and Karl Lagerfeld.

“Virginie is the most important person, not only for me but also for the atelier, for everything. She is my right arm and even if I don’t see her, we are on the phone all the time,” said the Lagerfeld in Netflix’s docu-series 7 Days Out, which includes a 45-minute episode on the Chanel Haute Couture SS18 show.

Viard took a solo bow after the finale of the Chanel couture show last month after Lagerfeld was said to be feeling ‘too tired’ to make an appearance. Viard who usually prefers to fly under-the-radar has been spotted walking alongside Lagerfeld in past shows wearing her long dark hair in a thick fringe and her usual combo of denim jackets, jeans and flat shoes.

But her role has been significant all along. Viard has been bringing Lagerfeld’s sketches to life – she’s probably the only one who truly understands every stroke etched by the legendary fashion desinger It was as though her mind and Lagerfeld’s were in sync.

“I visualise the show, get things ready for him, decide on materials, coordinate the teams and liaise with suppliers,” she shared.

““I love to please him, but also surprise him. He is very sensitive like all creative people, but very faithful and generous, which might not be what people would guess””
Virginie Viard

No words could describe exactly her experience working alongside Lagerfeld for over three decades. Whether he’s a colleague, a mentor or a boss, Viard confided that hierarchy is the last thing one would feel in the Chanel workroom.

Viard was born in Dijon, a city in eastern France. She came from a family of silk makers, which explained her natural trajectory into fashion. But she was not entirely keen to be working in the fashion industry back then, saying: “Of course, I looked at the magazines but I was much more taken by Nouvelle Vague (French new wave) films and stylish actresses like Anna Karina and Gena Rowlands.”

She studied at Le Cours Georges, a fashion institution based in Lyon, majoring in film and theatrical costume. While working with Dominique Borg on the film Camille Claudel, Viard had a chance meeting with Chanel. She continued to work with legendary glove-maker Madame Tribouillard and renowned milliner Maison Michel before she was invited to work as an intern for haute-couture embroidery at Chanel in 1987 (thanks to a recommendation to Lagerfeld by Prince Rainier of Monaco’s mutual friend); marking the start of a 32-year relationship with the late Lagerfeld.

She is the heart of Chanel; the mediator between Lagerfeld and the ghost of Gabrielle Chanel (while some beg to differ), and the translator of Chanel’s code of aesthetics to the world.

There have been no announcements as to how long Viard will be running the show at Chanel but the swift succession suggests that Chanel may follow the model of Alexander McQueen – McQueen’s closest colleague Sarah Burton took over when he died in 2010.

Viard faces an uphill task as she puts her own spin on the reputable fashion house while honouring the legacy of ‎Gabrielle Chanel and Karl Lagerfeld – both were huge influences on the world of fashion.

“I like to think of myself as the one who helps his (Lagerfeld’s) vision come alive,” she once said but will she now do it the Kaiser’s way?

Teo loves traveling to see ancient ruins and classical architecture. He enjoys the culinary experience of various cities but (still) refuses to eat anything insect-like. On a daily basis, he finds time hitting the gym to compensate for the amount of food he needs to eat just to write an article.