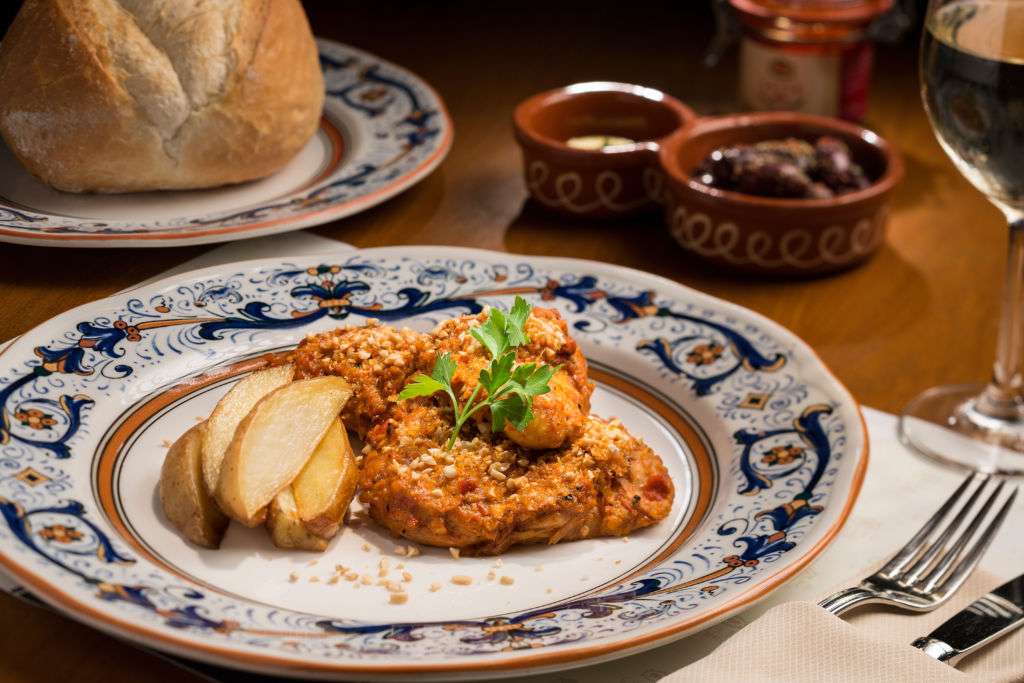 Chefs explain: Macanese cuisine, the world’s first fusion food is all but extinct

Food & Drink
Chefs explain: Macanese cuisine, the world’s first fusion food is all but extinct
Share this article
Next article

Like the Peranakan and the Kristang community, the Macanese people of Macao originated from the intermarriage between two diverse cultures — the Chinese and the Portuguese. The similarities are apparent especially when these cross-pollinated cultures are deeply influenced by Portuguese heritage.

The Macanese community have their own language called Patuá. This Portuguese creole language originated in the 16th Century when Macau came under Portuguese colonisation. However, UNESCO has estimated in 2000 that Patuá is now spoken by no more than 50 speakers and has since listed the language as critically endangered. Similar to its language, Macanese cuisine is all but extinct.

As a custodian of Macanese cuisine, Chef Susana Batalha of Fat Tea Macanese Food iterates that Macanese culture is a complex one with many historical and migration factors. “The heritage has primarily been handed down only through word of mouth. And as a 7th generation Macanese, we try to preserve these recipes through the test of time,” she says.

Food & Drink
Chefs explain: Why the fading Kristang cuisine needs to be preserved

“Macanese cuisine is derived from Portuguese sailors and settlers who brought European ingredients as well as other favourites that were accessible at major trading posts like The Cape, South Africa; Goa, India and Malacca, Malaya to Macao. Along with local Cantonese influences, the unique blend of flavours resulted in one of the first fusion cuisines in the world,” introduces Chef Susana who’s the muscle behind the first and only Macanese restaurant in Malaysia.

The dishes are extremely homely and created by Chinese wives who tried to cook something that were as close as possible to the food that their Portuguese husbands grew up eating back in Portugal. They experimented a lot with local Chinese and Southeast Asian ingredients as substitutes to the unavailability of Portuguese ingredients and seasonings. Through trial and error, this fusion food has since been perfected but served in a myriad of ways — something familiar in the Peranakan and Kristang kitchens.

“Macanese cuisine not only combines Portuguese and southern Chinese (mostly Cantonese) influences but also traces of Latin American, Indian, African and Malay flavours as well as cooking methods. One should experience Macanese food without any presumptions as it is unique in its own way but at the same time, you can taste the distinct nuances of these respective cultures and heritage,” she suggests.

Common cooking techniques include baking, grilling and roasting — in styles that are uncommon in Chinese cooking. This speaks to the eclectic nature of Macanese cuisine. Furthermore, Macao is well-known for its flavour-blending culture, and modern Macanese cuisine today continues to seek its relevance as a type of fusion cuisine; one that is both harmonious and perplexing at the same time especially for its highly contrasting combinations.

Typically, Macanese food is seasoned with an assortment of spices like cinnamon, turmeric, chilli and enriched with coconut milk and animal fat. “Similar to any Asian kitchen, you have a mixture of both local and European ingredients like soy sauce, olive oil, kicap, chorizo (sometimes substituted with the Chinese sausage or lap cheong) and plenty of spices,” explains the Macanese chef.

“Macanese food is spicy, tangy, sour and sweet but unlike the numbingly hot spiciness, Macanese dishes are the warming sort of spicy. It has the quality to be your go-to comfort food. But like many generational cuisines, there are many dishes that have already been forgotten and are no longer served in homes or restaurants today.”
Chef Susana Batalha
Some of the famous dishes include galinha à Portuguesa (Portuguese-style chicken), bacalhau (traditional Portuguese salted cod that’s similar to the Basque’s bacalao), minchi (spiced meat mince served with rice and fried egg, similar to Thailand’s prad krapow), cappela (meatloaf) and diabo (a dish similar to the Malaysian chap choi or chop sue but with a more European flavour). Tapas are also an integral part of Macanese cuisine.

The cuisine is very much comparable to Kristang cuisine thanks to its Portuguese roots. Pig’s ear is a popular delicacy in both communities, cooked in stews and braised in a concoction of spices like star anise, cinnamon and clove. These ‘ancient’ spices that were popular during the golden days of the maritime trade in the Malay-Indonesian archipelago. In the dessert department, both Macanese and Kristang recipes lean towards a sweeter route with the popular semolina or almond cake being a signature in any traditional household.

Food & Drink
Review: The Brasserie at St. Regis KL takes you on a journey of Basque cuisine
Commercially, many would already be familiar with the pastéis de nata, otherwise known as Portuguese egg tarts. Another crowd-pleasing snack that many may not know is Macanese is the pork chop bun that is highly popularised in Hong Kong. Known for its bread varieties, the Macanese also created different types of buns including the pineapple baos, sweet bread and cocktail buns that are stuffed with coconut custard-like filling. You may find this similar to the Kristang’s pangsusi which is also a baked pastry stuffed with savoury meat mince.
Culture
Morpheus Hotel by Zaha Hadid is Macau’s newest architectural gem

In a globalised world where most cuisines are now easily available everywhere, this Macanese food remains rare especially outside Macau. It’s only in recent years that the native recipes has flown from home kitchens to restaurants and more recently in some countries across the region.

Chef Susana continues: “As the cuisine itself has always been adopted from other cuisines, it can easily be misunderstood as Chinese or Nyonya. In recent years, the younger generation are slowly taking interest in cooking traditional Macanese food again. There’s hope.”

And to say the very least, it’s after all a cuisine that’s waiting to be discovered.

Food & Drink
Kei Kobayashi is the first Japanese chef to join the three-Michelin-starred ranks
Gear
The technological marvels within smart wallets and which ones to get
Style
OMEGA revamps the entire Constellation men’s lineup
Style
9 of the best fashion moments from the Grammys 2020 that we absolutely loved
Gear
Take a look at Bentley’s new flagship, the Flying Spur
Food & Drink
Where to get the best plate of Hainanese chicken rice in KL & PJ
Style
Audemars Piguet releases its first complicated Royal Oak, designed with input from a watch influencer
Style
The most beautiful wedding gowns we saw at Paris Haute Couture Week 2020
Travel
Visit the 6 real-life locations in Japan that inspired Studio Ghibli films
Sign up for our newsletters to have the latest stories delivered straight to your inbox every week.