Seville Travel Guide: What to do in the birthplace of flamenco

Travel
Seville Travel Guide: What to do in the birthplace of flamenco
Share this article
Next article

What’s there to do in Seville, Spain? Plenty. The Andalusian capital is iconic for several things: the Flamenco dance, tapas, bullfights, and orange groves.

Other than that, Seville is also a great place to immerse yourself directly in Moorish heritage, and this is especially obvious in its colourful architecture and painted tiles. Below, we have a short travel guide for you to see the most important sights in the city, the best luxury hotels to stay in, and also some of the best restaurants to try out. There’s a tapas restaurant serving both traditional and modern tapas, a Michelin-starred restaurant, and a local’s favourite.

We’ve covered the most important parts – the rest is up to you to explore and discover. For now, here are the must-sees of Seville in Spain. 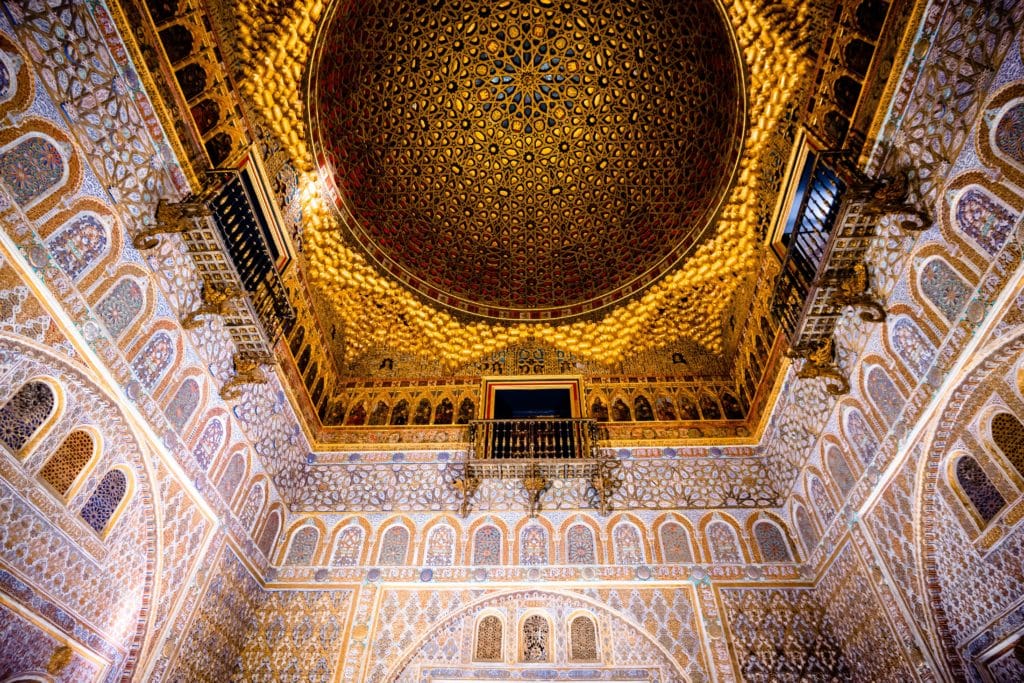 1
Visit the Royal Alcázar of Seville

The Royal Alcázar of Seville is UNESCO-listed and is still being used by the Spanish royal family. But the entire structure is what you’re there for. The complex is almost completely done in a Mudéjar style, which is a Moorish-inspired architecture for non-Islamic buildings. The Royal Alcázar was developed by Pedro the Cruel in the 14th-century. Be sure to look up once in a while and admire the intricate coffered ceilings. The courtyard and its sprawling gardens are also extremely Instagram-worthy, once you’re done admiring it. 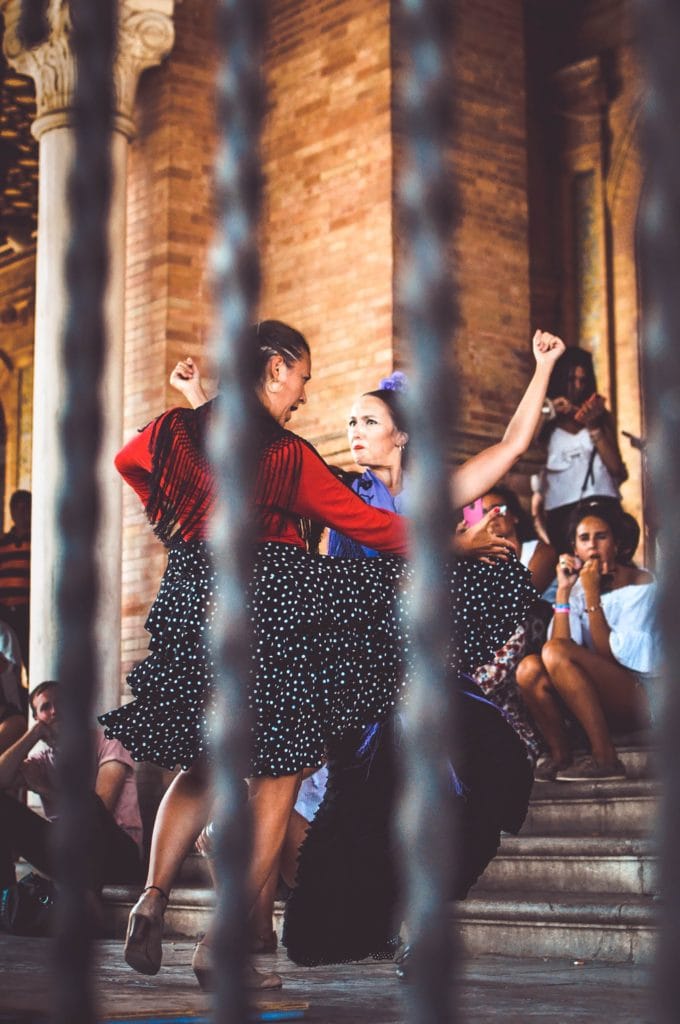 You can’t not catch a flamenco show when in Seville. It is, after all, one of the alleged birthplaces of the flamenco – other possibilities include cities in Southern Spain such as Cadìz and Granada. The best place to watch one is at T De Triana, a gorgeous bar with views of the river. The bar is host to the Esencia dance troupe (one of the best in the city), but that’s not the other special thing about it. These dancers will bring you on a tapas tour around the neighbourhood, dance, and finally end the night with drinks at T De Triana. 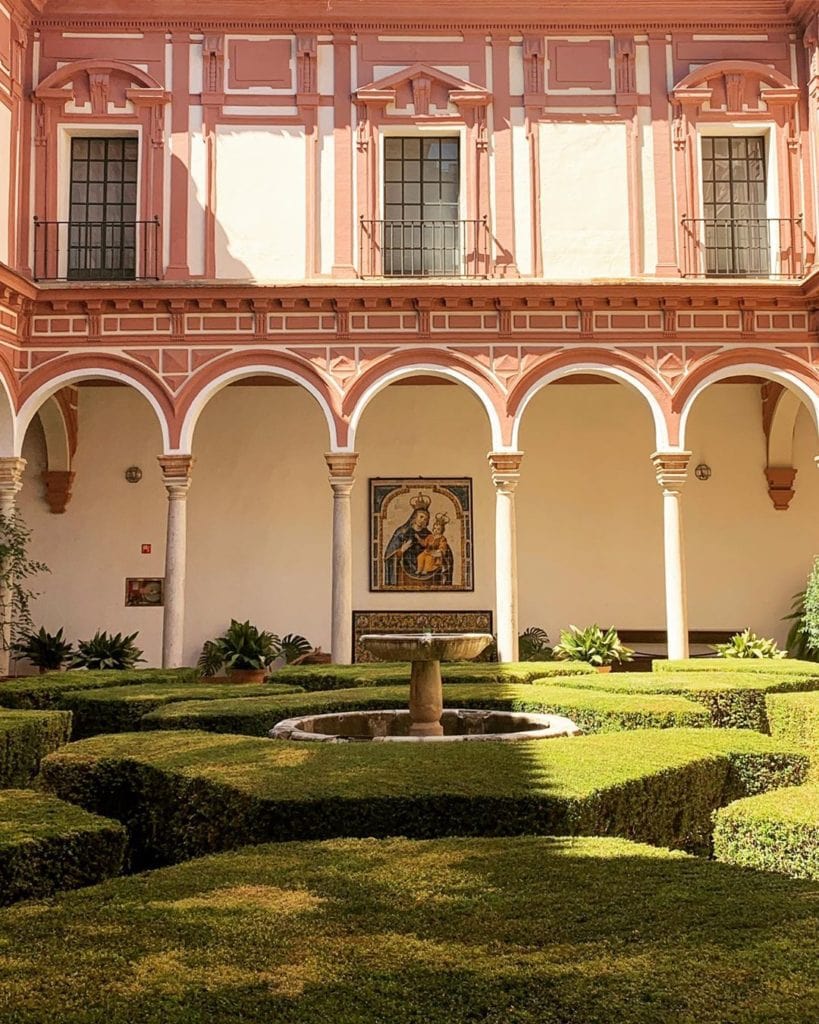 3
Embrace culture at the Seville Museum of Fine Arts

In the 17th and 18th century, Seville went through an era of extreme wealth. This was evident in the rise of a whole cultural movement, including its highly ornate baroque style buildings, paintings, and sculptures. You can see remnants of this wealth and cultural movement at the Seville Museum of Fine Arts, an equally distinguished building on its own. There are several airy courtyards within the building that are great for a momentary tranquil escape. However, pay attention to the works on display, most of which have been influenced by religion, having come from monasteries and convents around the city. 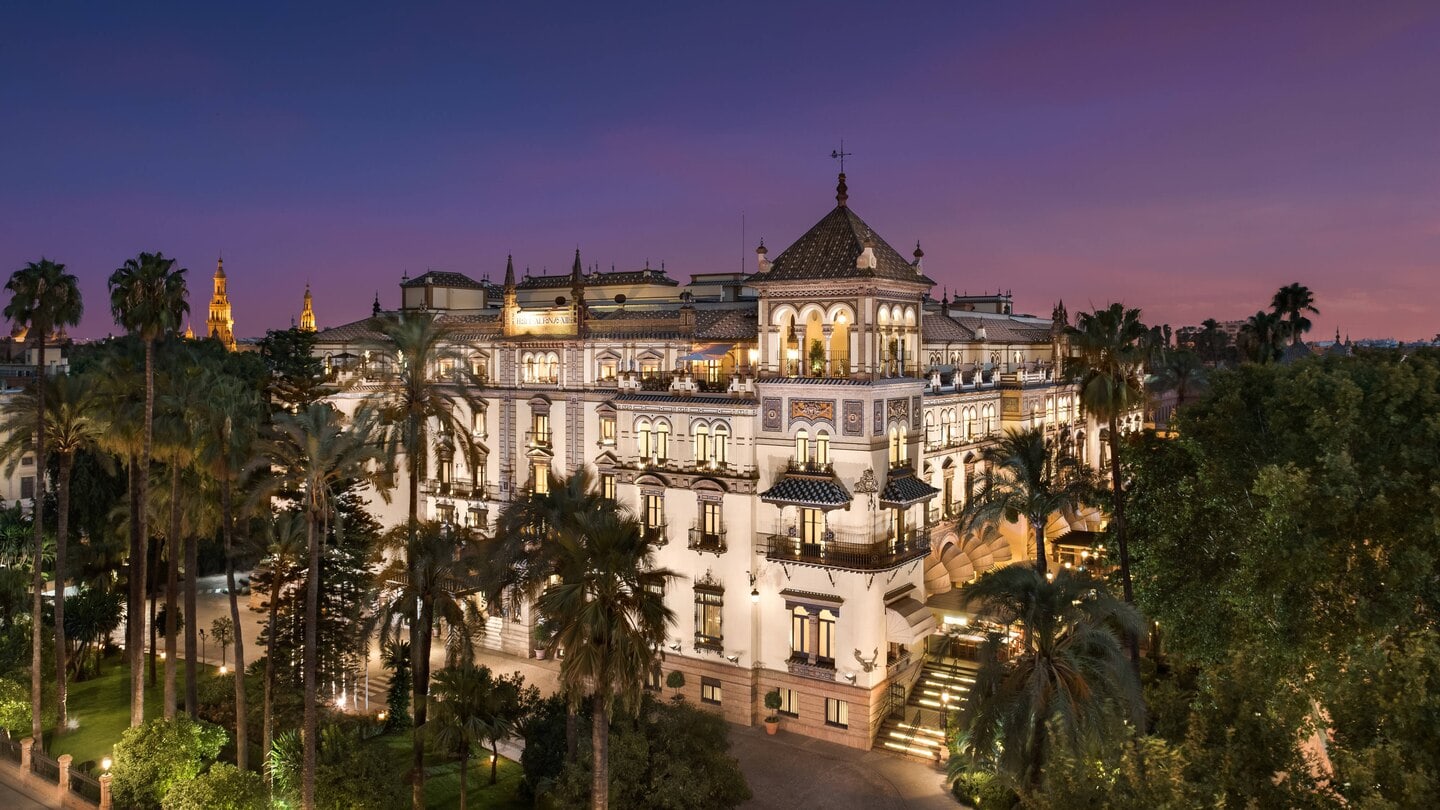 Hotel Alfonso XIII is one of the most stunning properties you can check into at Seville. When it was built by King Alfonso XIII himself back in 1929, it was the grandest hotel in Seville. And it’s not difficult to see why. Luckily you can see why too, because most of the original structure and fittings still remain the same, from the mirrored wooden lifts to the Triana ceramic tiles, crystal chandeliers, and more. The Andalusian-style patio and its courtyards are stunning, and the outdoor pool is a rarity in Seville. You’ll enjoy your time there. 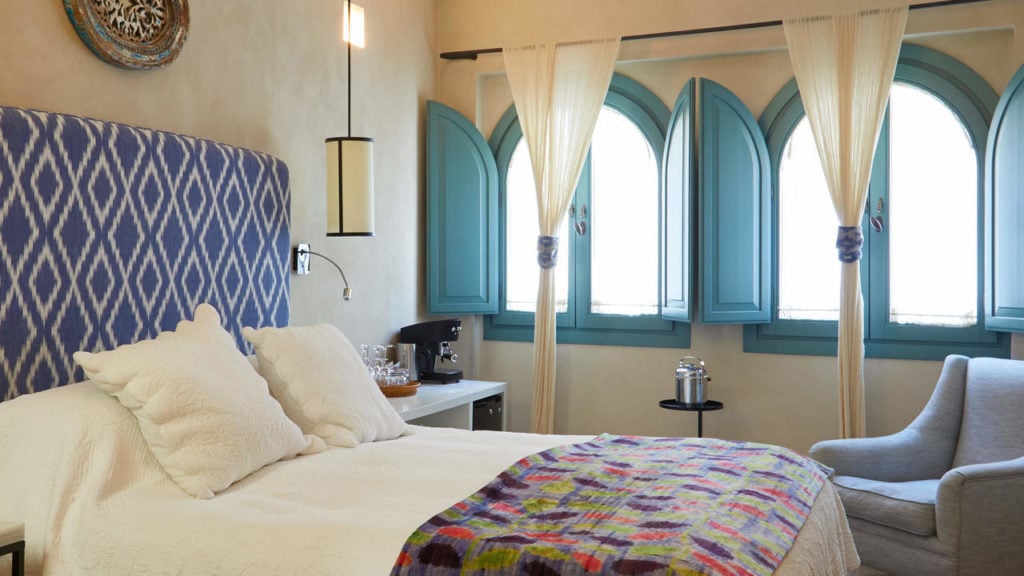 The Corral del Rey is small but definitely worth staying in. With only 17 rooms on the property, this 17th-century palace in the middle of Seville’s old town is calm, elegant, yet somewhat bohemian. The hotel uses a lot of decorative items from Southeast Asia and Morocco, lending a tropical desert vibe to the place. There’s a rooftop bar in the main building with a plunge pool and an honesty bar – essentially an unattended beverage bar. 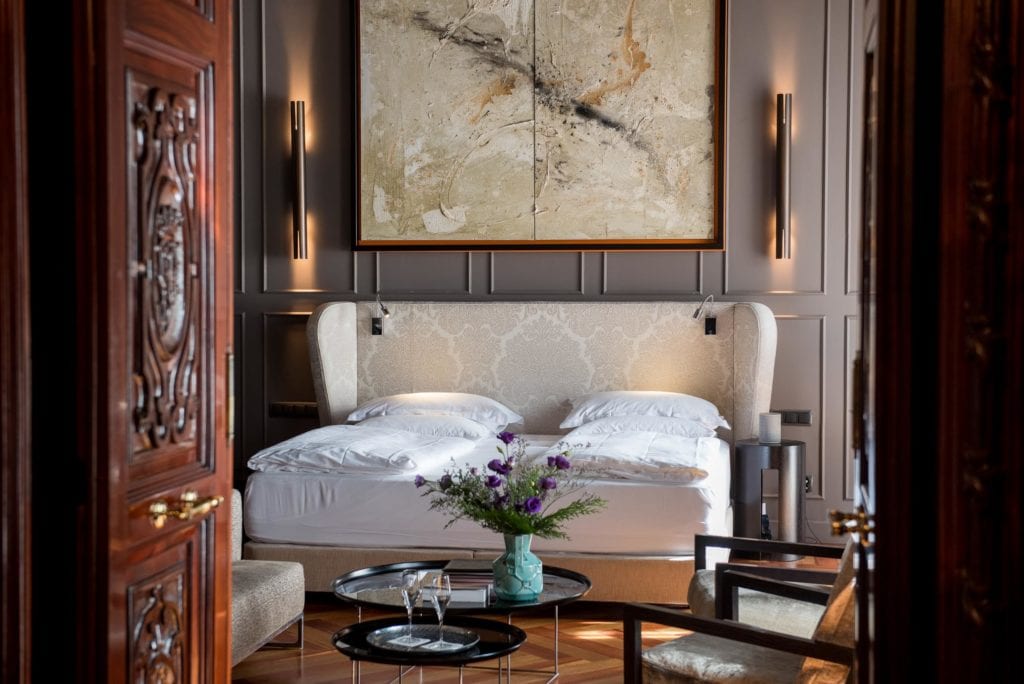 Contemporary style meets Andalusian period glamour at the Hotel Palacio de Villapanes, which manages to balance both perfectly. This luxury hotel is sumptuous with its Moorish arches and ornate tiles, while the in-house spa has a sauna and a Turkish bath worth checking out. At sunset, be sure to head to the rooftop bar for views of terracotta rooftops while sipping on a cocktail. 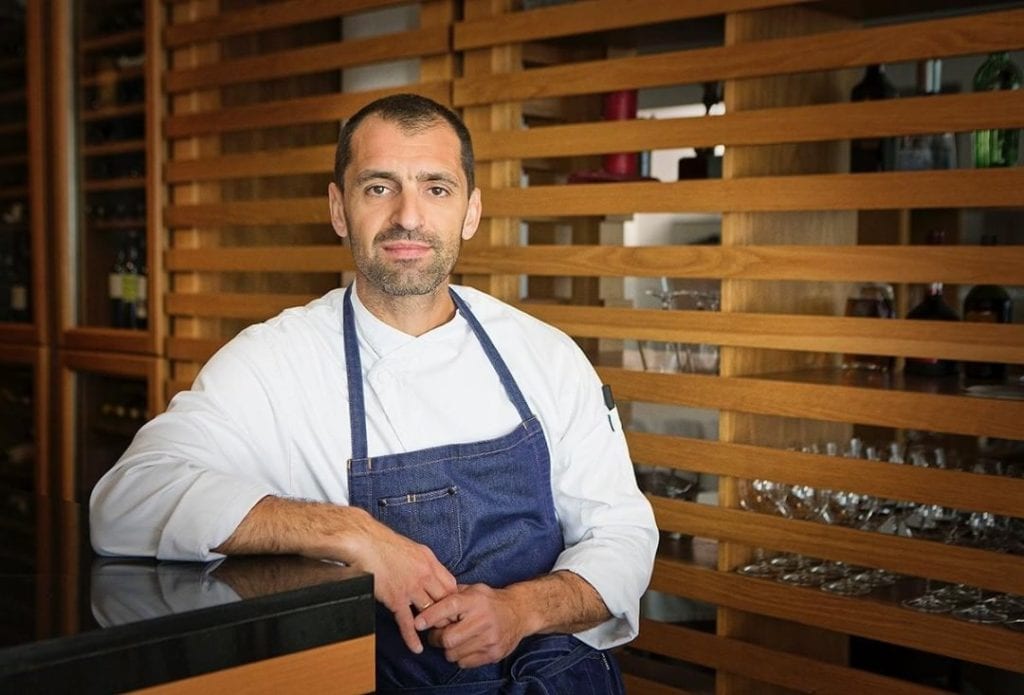 If you’re in the search for a good restaurant serving up traditional Andalusian cooking with high-quality fresh produce, then Abantal is right up your alley. Co-owner and chef Julio Fernandez Quintero will take good care of you with a selection of tasty dishes. Try out the Iberian pork appetisers, boneless suckling pig with endives, and more. If you’re feeling fancy, try the seven-course tasting menu. Oh, and did we mention it’s also a Michelin-starred restaurant? 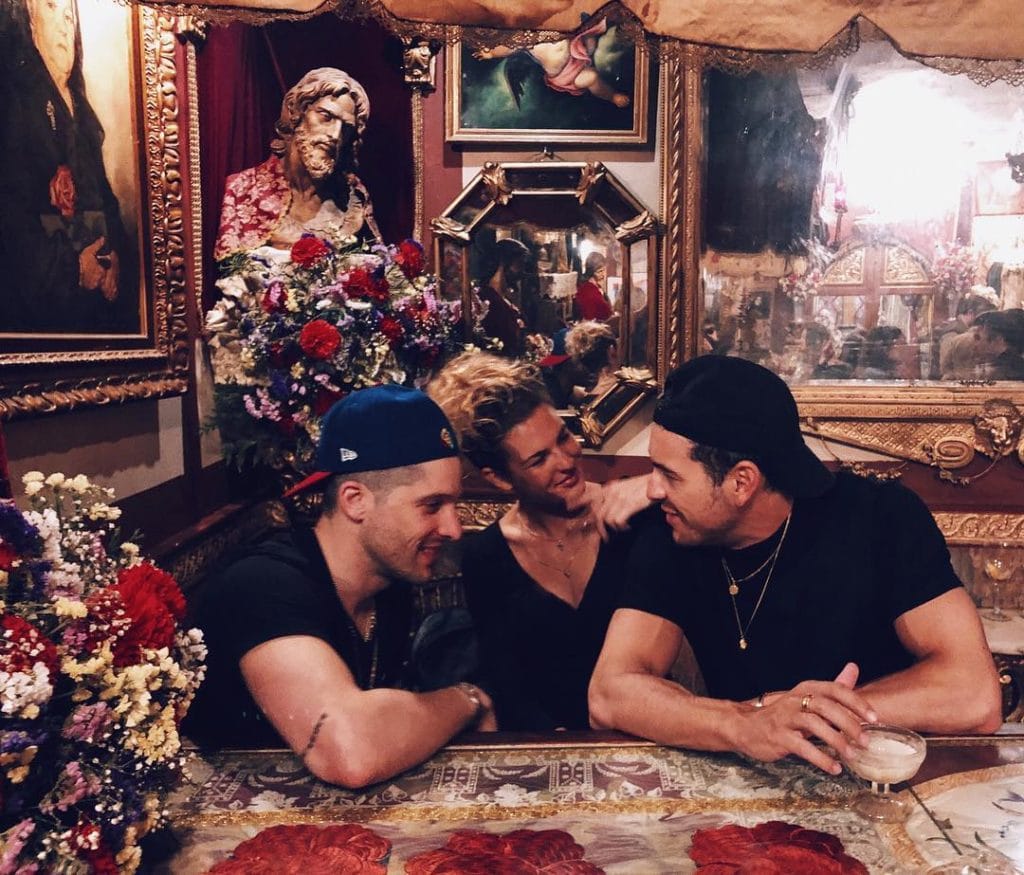 This cocktail bar is maximalism done right – at the door is a picture of the Virgin Mary ensconced in flowers, while the interior is full of vintage paraphernalia, religious altars, and plenty of gold and deep red roses. In the background, 60s Spanish pop plays while patrons sip on cocktails like the sangre de Cristo – loosely translated to the “blood of Christ”, a concoction of whisky, grenadine, and rosé champagne. 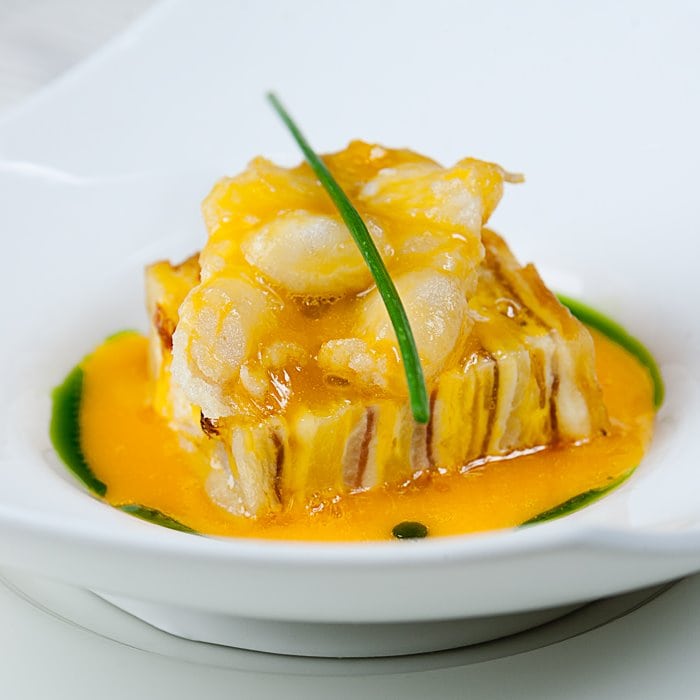 You can’t miss out on tapas when in Seville. One of the best places to try it is at Yebra, a favourite of the locals. Here you’ll be able to sample traditional tapas – try the shellfish or morcilla (blood sausage) for the full experience.

Spain travel guides Seville
PohNee Chin
Associate Editor
Poh Nee is the associate editor and writes about travel and drinks. When she's not living out her holiday dreams via Google Earth and sipping on an Old Fashioned down at the local bars, you can find her snug at home bingeing on Netflix and mystery fiction.
Travel Drinks