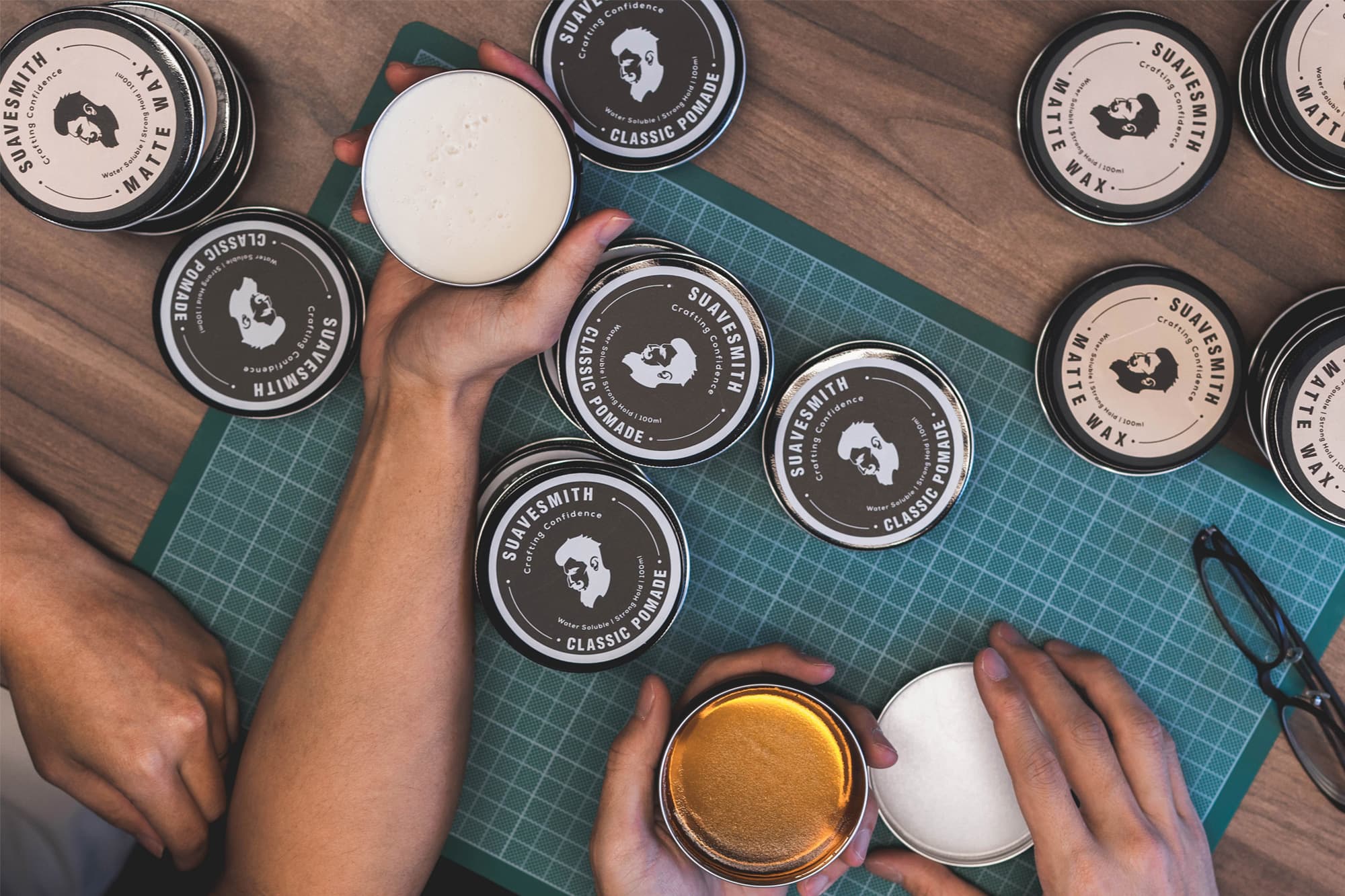 Masculinity in 2019 is a loaded term. As gender equality breaks new ground and terms like “toxic masculinity” gain agency, big brands from fashion to grooming along the likes of Ermenegildo Zegna and Estee Lauder are launching campaigns and broadening the narrative.

The mission? To put masculinity under the microscope and redefine what it means to be a man.

“Too many boys are trapped in the same suffocating, outdated model of masculinity, where manhood is measured in strength, where there is no way to be vulnerable without being emasculated, where manliness is about having power over others,” wrote Michael Ian Black in a New York Times opinion piece.

Suavesmith — a homegrown brand by two former finance men — is doing their part. Founded in late 2018, the new brand currently has two products under its belt: a matte wax and pomade. Both are aqua-based and meant to be as easily washable as it is moisturising for the hair. The bigger mission? To craft confidence and a community that unites men of all races, ages and sexual orientations.

That’s a noble mission during times when brown face is a hot button topic and colonial laws formed before the invention of the lightbulb are still a lived reality. But how does hair wax and pomade really play into the equation of redefining masculinity?
We meet up with the founders Justin Chiam and Stuart Ho to take us through their journey — from discovering the need for such a product to how brands today have the capacity to form a community.

What was the moment when you realised you needed a product like this?
Justin: You know, over the years we’ve been using all these products but as I approached my late 20s, I started losing my hair. I think it was because I just didn’t wash my hair after those big nights out and my scalp was really oily. I was looking for a product that had strength in its hold and at the same time didn’t exacerbate the problem. It has to be easy to wash and I couldn’t find something.
What were the symptoms?
Justin: The first thing is of course, looking in the mirror.
Stuart: It wasn’t a good sight!
Justin: I realised that the buildup worsened when I was using a lot of hair product. As an equity research analyst, I had to meet clients and my product usage intensified. With that usage, I realised that I had more hair falling out. I wouldn’t be so concerned if I still looked okay but my hairline was receding. So that pushed me to look for an alternative.

What was wrong with the mainstream products?
J: If you wanted a different look, you can get all sorts of products in the market but none of them were easily washable and aqua-based. That was the key thing that was lacking.
S: When you washed your hair and it still feels thick and clumpy. That was the problem I had too.

What was the process like?
S: It was long drawn out. We had to meet the chemist and got a lot of different samples. We tried all of them and looked for all the components that we want. Things like smell, strong hold, washability. These chemists were already producing for the big brands so we looked for someone who already has that knowledge base and stabilise the product.

J: That was the longest part. It has to sit for a month and the usage of it has to consistent. We got pretty lucky because our products took about three iterations.

What went into the formulation?
J: One of the key ingredients is Kaolin clay, which moisturises our hair.

What’s that?
J: It’s clay from a certain region in China, it’s different from the usual bentanite that people use. It’s more moisturising and gives it that matte texture it came down to these subtle differences and is a core component. We also used beeswax and castor oil for the matte wax.

S: At the end of the day, we aren’t chemists. We’re also end product users, so we know what we wanted. He suggested that kaolin clay would fit the properties that we were looking for.

Is there a bigger mission here?
J: When I started losing hair, there was a hit on my self-confidence. I would vehemently deny it when my friends asked me about it. Suavesmith is about being the enabler for guys to feel good about themselves.

A lot of brands all say that they want to craft confidence — how is that different really?
J: In this day and age, we also want to build a large community that rallies around each other which goes beyond the product. These things take time but we’re trying to cultivate that by being personal with our customers. We want to meet them, talk to them and hold events. That’s lacking in the current industry.

S: It’s something that the big brands currently don’t have. We’re just us two so we can build that relationship.

Tell us more about this community, what’s so important about that?
J: Stuart and I, we’re part of the same community for a good number of years. It provides a semblance of community and support from the perspective of mental health and a sense of security. The community that we’re trying to build will revolve around a similar interest in men’s grooming and being your best. Whether it’s in sports or taking care of your body or your looks. It’s about a community regardless or age, race and sexual orientation. We can all rally around each other.

That’s a noble mission and at the same time there’s this climate of men being depicted as the alpha male? Are you trying to break that mould?
J: We never thought about it that way. For us it’s about building a brotherhood come rain or shine and I think that’s very important.
How are you going to build this?

J: The first thing that we’re trying to put into place is partnering up with some barbers.

S: We could for instance have an event where a barber or a hairstylist comes down and he can give them a five minute styling session with tips.

J: We could even have a formulation workshop where we work on prototypes together, experiment on ingredients. It’s all about understanding what they want. There are people with other problems and things they want to achieve.

On that note, will you be creating different products?
J: It will be hair products for the first couple of years which will be functional. We’re looking into hair products with biotin such that long term usage will lead to stronger hair. If your hair is excessively dry hair, we’ll have products with argan oil. It won’t be for everyone but there will be solutions for people.

Talk shop Suavesmith Singapore brand
Azimin Saini
Editor
Azimin Saini is the deputy editor and manages the team in Singapore and Kuala Lumpur. He writes about food and culture (mostly) and has been told the sound of his backspace is like thunder through the clouds. On a regular day, he has enough caffeine in him to power a small car.
Restaurant Review Chef Interview Entrepreneurs

Ryan Pang on finding balance as the Man of Today

Edwin Hung on how he embodies the Man of Today