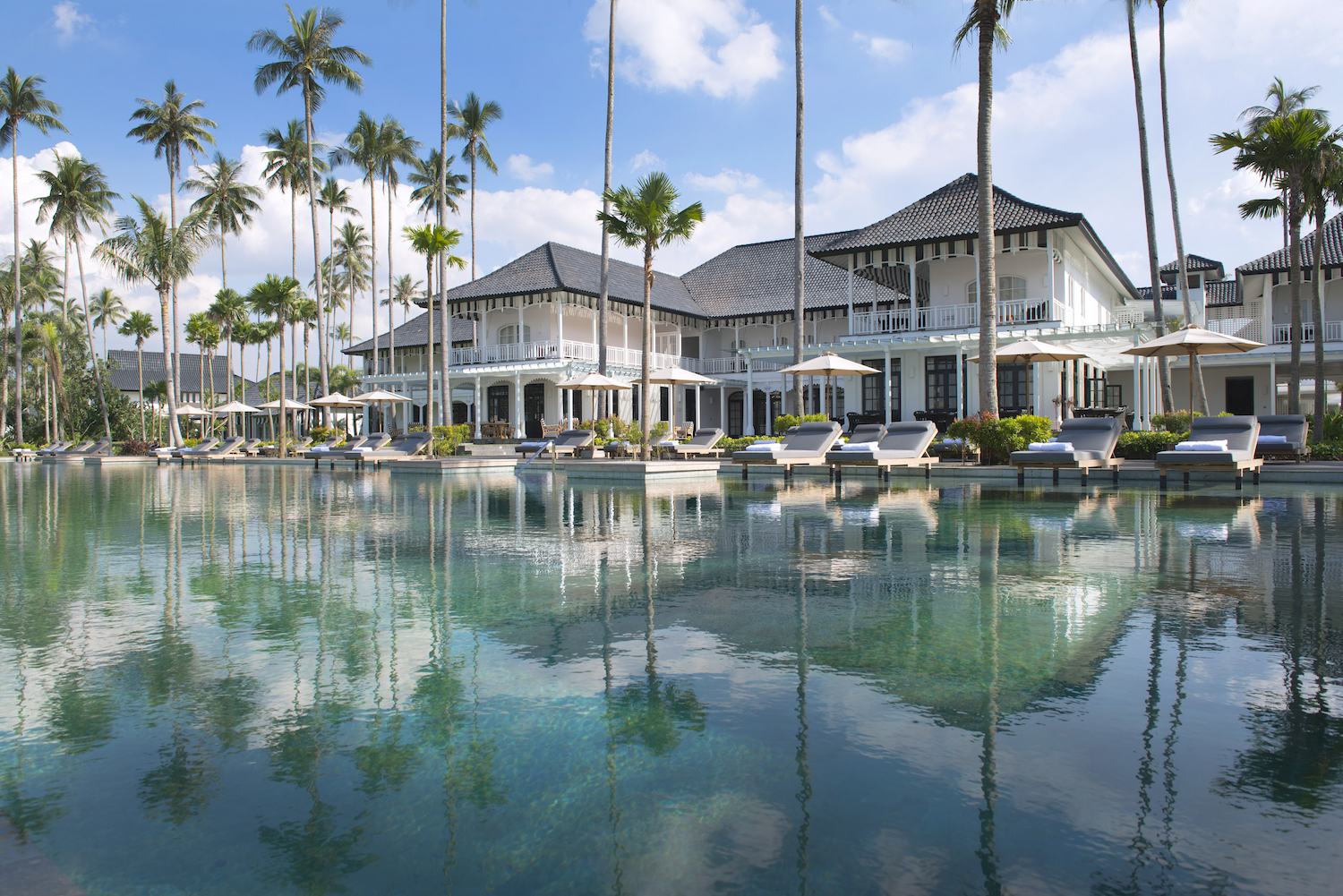 In Bintan, the island of quick getaways, water sports and massages take priority on most holidays’ to-do lists. Appreciating art is likely the least of any time-strapped vacationer’s concerns. But at The Sanchaya, visitors are instead encouraged to live and breathe it.

Currently, the luxury resort holds a number of artworks within its confines. The entrance to this majestic colonial-inspired is graced by Singaporean artist Kumari Nahappan’s Guardian Angel, a grand 2.5-metre-tall white pineapple sculpture. Nearby Nahappan’s Ode to Thirty — 30 massive fibreglass saga seeds in fiery ombres — circles around lazily in a makeshift pond.

Travel
Treat yourself: The ultimate rest and recharge experience at The Sanchaya

Kumari Nahappan’s Ode to Thirty (Image credit: LSA)
Instagram opportunities aside, The Sanchaya has also doubled up as an art gallery and a place for hosting art residencies. For the past year or so, owner Natalya Pavchinskaya has been inviting visual artists from around the world to a two-week stay in the resort. In return, artists leave a few art pieces at The Sanchaya and work while entertaining curious guests.

The multi-hyphenate is also an avid art collector and has been working with her artistic guests in creating works. Last year, she worked with London-based illustrator Charlotte Ager over two weeks. Ager’s sketches of the resort are now immortalised as greeting cards, welcoming new guests to their suites or villas.
Just recently, Los Angeles-based artist Darel Carey had just completed his residency and leaves possibly the largest and most striking piece in The Sanchaya to date. Carey’s viral works are generally temporary site-specific works, pieced together with strips of electrical tape then taken apart after a few days.

This recent one is permanent: a mural of Carey’s signature hypnotising strokes of black and white now graces the swanky Library lounge, where guests peruse books and board games amidst plush sofas and vintage travel paraphernalia.
The contemporary piece is unexpected, but not necessarily out of place. Aside from the slight eye-crossing one might get from this illusion, the unnamed piece does blend in neatly to the monochromatic colour scheme in the resort.

Some inconveniences were experienced in the build-up to the piece. Carey has originally designated his work on a stairwell next to the lobby. Guests had to take a different route back to their suites. When the project didn’t work out as planned, Carey took it over to the Library. With only days left on his residency, Carey worked overnight. Assistants moved furniture and readied the concrete canvas for taping and painting. After another day of checking and touch-ups, the piece was finished and ready for pictures.

The Library was certainly a lot livelier than most days. The Sanchaya’s guests might not have enjoyed a peaceful, private moment in the lounge, but got to witness the real-time creation of one of Carey’s mesmerising works — one that’s often documented in a 30-second time-lapse over social media.
Besides that, guests have the opportunity to speak with Carey through his creative process: whether it’s over a quick lunch, while tracing out his mural with strips of tape or over drinks at the bar. Watching artwork come into fruition doesn’t get more personal than this.

It is, of course, more than just entertaining tourists for a short moment. For artists like Carey and Charlotte Ager, it’s an opportunity to debut and introduce themselves to Southeast Asia. During his two weeks in The Sanchaya, Carey had the opportunity to share more about his work at private members’ club 1880 in Singapore. Bintan might get the first taste of his works, but we might just see more of Carey’s illusions in the future too.

The Sanchaya Bintan Darel Carey Art residency
Jasmine Tay
Senior Writer
Jasmine Tay is the dining, culture and jewellery writer. She makes fine silver jewellery and causes mini-explosions in the kitchen when she can't afford fancy dinners. Sometimes she tells people what she thinks about art, and binges on the music of Danzig when they don’t agree.
Dining Culture Jewellery