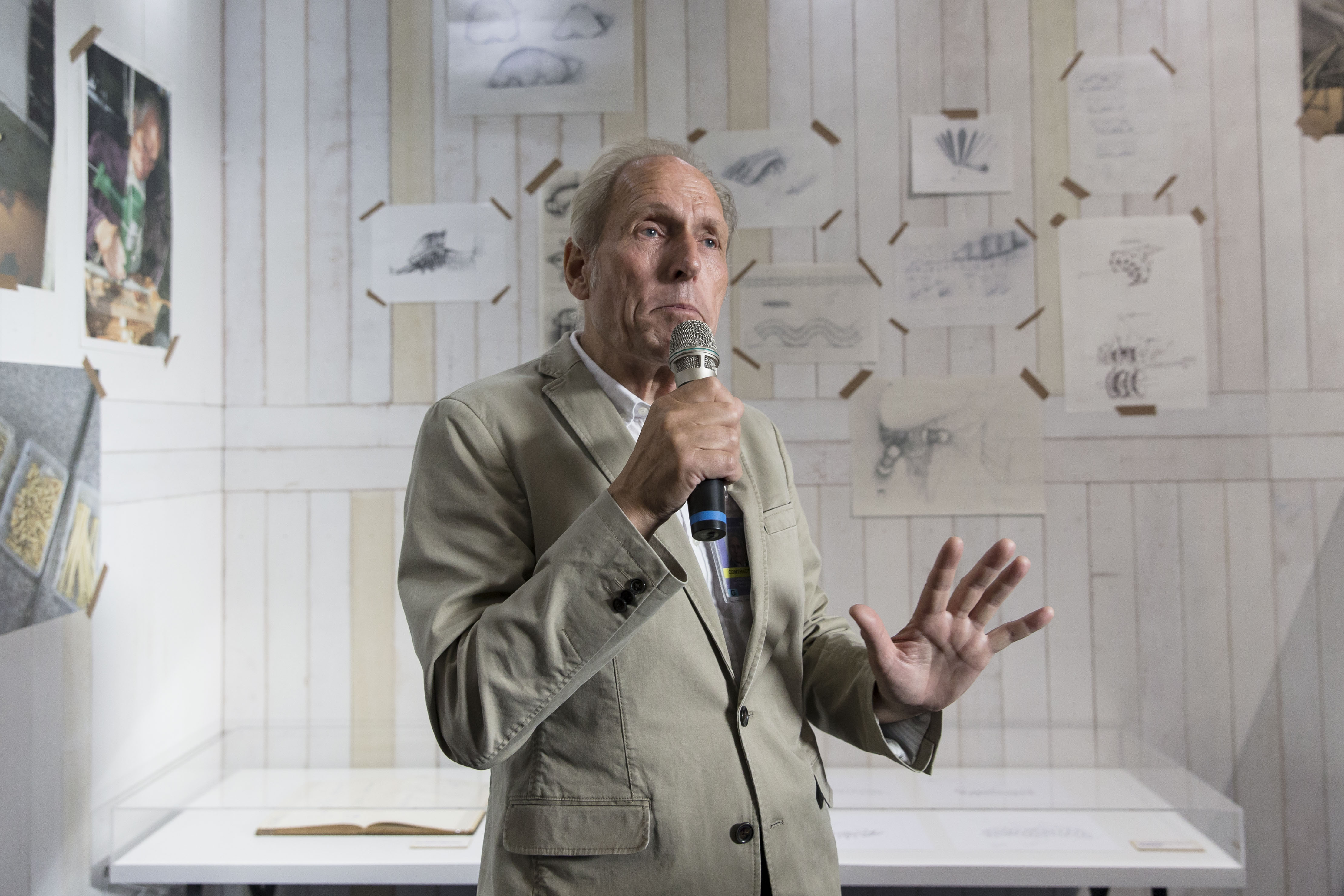 Dutch artist Theo Jansen pulled a large plastic-tubed skeleton across the exhibition floor. It moved in longitudinal waves, compressing and refracting with each push but with surprising grace and purpose. The skeleton — which he named Animaris Bruchus Primas — resembled a caterpillar with its long body and a countless number of legs, which led us to wonder if Jansen had been inspired by the insect.

“They have different driving systems; the Bruchus has four ropes while caterpillars have muscles. It’s just by coincidence, I don’t want to make anything that already exists,” explained Jansen, who was recently in Singapore for the opening of Wind Walkers, his ongoing exhibition at the ArtScience Museum, which showcases 13 of his creations and charts his 28-year journey in building them.

The 70-year-old artist did name the Animaris Bruchus Primas after the caterpillar, though, with its Latin moniker that translates to “the first moving caterpillar”. The mechanical animal is part of the latest series of his Strandbeests, of which he has already created three different editions – one that moves when pulled, one that is segmented, and one that is powered by the wind.

Strandbeests, or Dutch for “beach animals”, are essentially mechanical skeletons brought to life by the wind. Jansen first started making them in 1990, using materials such as yellow PVC piping, plastic bottles, fabric airfoils, zip-ties and even rope. The animals can independently roam around even when wind is absent, as they rely on stored air pressure to propel themselves. In museums, however, where the air is still, Jansen’s assistant use tubes to pump air into the plastic bottles, that will make the animals come alive within seconds.

This is the case at his ArtScience Museum presentation, which marks the Strandbeests’ first appearance in Singapore and Southeast Asia, and ends 30 September. Before this, the Strandbeests were at Fukushima, Japan and took two weeks to land in sunny island Singapore via containers that are shipped by boat.

The Strandbeests have uncanny mannerisms, akin to animals. They also look like skeletons, thanks to the tubes that Jansen uses to construct them. These tubes start off in a bright yellow shade but gradually fade to a muted white as they get exposed to the sun, which also serves as a useful way to identify how old they are. Also, Jansen names his beasts in Latin to further reinforce the idea that they are a part of Earth’s evolution, just like plants and animals.

Of the 13 large-scale skeletons on display, some will be reanimated with the help of Jansen’s assistants, while others can be pushed and pulled by visitors. A handful of old, retired Strandbeests, which Jansen dubs “fossils”, will also be present. The Animaris Sabulosa that was created in 1994 is one of those fossils that no longer moves today. It sits with its “legs split and chest on the ground, like it’s given up”, described Jansen.

Comparing his past and present Strandbeests, one can truly see how far Jansen’s works have come. He recalled his first-ever mechanical animal, the Animaris Vulgaris, which he built in 1990 — it was only able to move its legs when laid on its back. “At the beginning, the Strandbeests did not walk very well. They collapsed easily and were too weak and heavy,” said Jansen.

However, he remained optimistic and channelled each failure and disappointment towards his next few creations, believing he would one day be able to make them independently walk.

“I saw the whole future in front of me. There were not many reasons to be optimistic looking at the animal, but I was, without any reasons. You could say that I am an irrational optimist,” he said.

Birthed out of a problem

Jansen was inspired by Richard Dawkins’ book The Blind Witchmaker. He was given the book in 1986 and was instantly intrigued by the theme of evolution and the understanding of memes — mental genes passed from one brain to another (not the Internet memes we know today, that’s for sure.)

At the time, Jansen was a columnist at De Volkskrant, a Dutch morning newspaper, where he wrote on the dangers of rising sea levels that could potentially flood the streets of Holland. He proposed building animals or machines that would toss sand in the air to create dunes to combat the issue. He then promised to work on it for a year, which then turned into his lifelong project.

Jansen’s background in physics, writing and painting served as the foundation for developing the Strandbeests as well as for their evolution. He started by creating genetic algorithms to define lengths of the tubes for a Strandbeest’s legs on his Atari computer, which is also on display at the ArtScience Museum. That is when he formulated the 13 specific measurements used across all Strandbeests that enable them to move.

Jansen believes that Dawkins’ meme of Strandbeests existed even before 1990 and that they “were floating in the air, looking for brains to land in”. He explained, “I was lucky enough that they used my brain to infect the rest of the world. I’m just a victim of the Strandbeests.”

After 28 years, the Strandbeests have gone through multiple generations and transformations, but Jansen is steadfast on certain rules. For instance, he only works alone. “It’s hard for me to concentrate when someone is around,” he said. “I get worried if they have enough coffee or other things. I don’t want to get disturbed by any other thoughts than the beasts.”

In the last four years, he has had three assistants, but only enlists their help in carrying the giant beasts to and from Scheveningen beach and his studio in the Netherlands.

Culture
Inside GOHD Books, the only rare books store in Singapore

Back in the ’90s, Strandbeests were very much ahead of their time when they first began. And now, in this technologically advanced 21st century of artificial intelligence and computer-generated influencers, they are even more relevant today. But another restriction Jansen imposes upon himself is that his Strandbeests will never turn digital.

“You will never find a machine in my Strandbeest. It is against my religion,” said Jansen, firmly. He deliberately limits his materials to challenge himself, and to see how far he can go with just plastic pipes and bottles.

Jansen’s works have drawn a cult following in many other art and science aficionados around the world, but some of these do not play by the same rules when it comes to creating their own interpretations of the Strandbeests. As such, thousands of Strandbeests have been replicated all over the world in different materials like wood, aluminium and have even been 3D-printed. Adam Savage, former co-host of the show Mythbusters, recreated a Strandbeest using steel. Also, instead of being propelled by the wind, Savage’s version was pedal-powered, much like a bicycle.

“It’s a wonderful feeling that people get inspired and have fun,” said Jansen, who added that this is an infectious trick by the Strandbeests and a form of “disease”. “This disease gives you an illusion that you’re happy; the Strandbeest disease makes you feel good.”

Jansen has sold only a couple of his mechanical animals to art collectors and even an insurance company once. Apart from that, his Strandbeests either travel the world to be presented at art exhibitions or live free on the beach in the Netherlands. Jansen’s next art exhibition will be in Milan, Italy as well as Sapporo and Fukui Prefecture in Japan. Jansen is also hoping to have his animals tour the United States in 2020.

Amazingly enough, none of Jansen’s great creations has ever been destroyed or damaged by human touch.

“That never happens. I find beatings and graffiti on my cabin, but they never touch the animals. People see what it is and don’t want to hurt it. Its best weapon for self-defence is its charm,” he said.