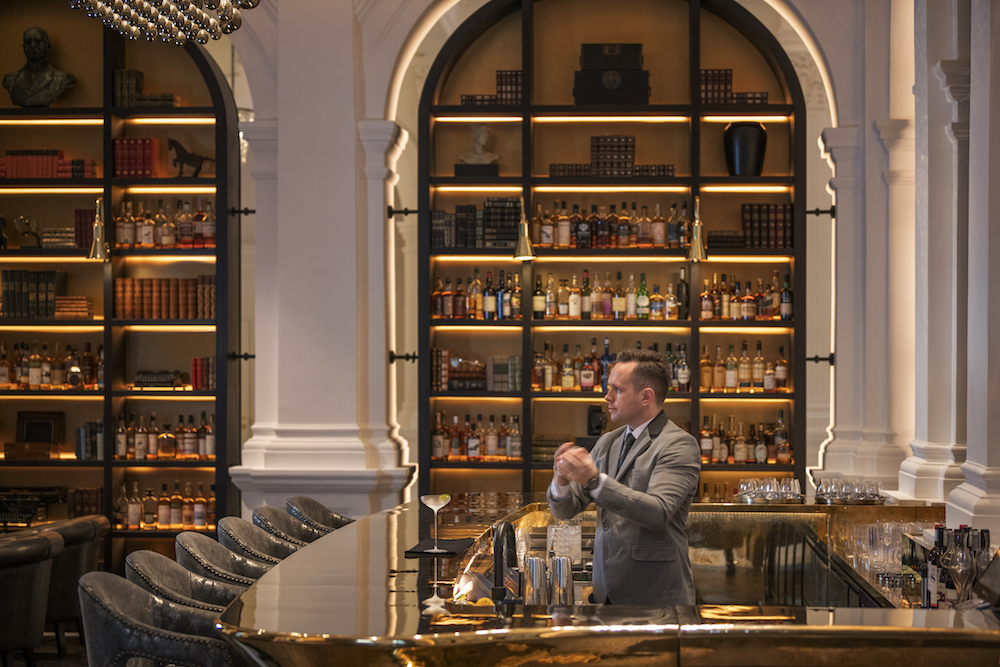 Singapore may be a small nation, but it has a regular presence in the annals of literature. Writers like Ernest Hemingway, W. Somerset Maugham and Rudyard Kipling are just a handful that crossed half a world to render our city into words for posterity. One would expect that Singapore’s usual landmark suspects would form fodder for these literary greats, but the common thread that underlines all their writing lies in a stately estate that has stood in the heart of the city since 1887: the Raffles Hotel.

Since the 19th-century, the monumental establishment has enjoyed a long legacy of writers calling its spacious rooms temporary homes, and Raffles Hotel is determined to take that history into contemporaneity. As part of the hotel’s recent overhaul, the Writer’s Bar has been elevated to a full-fledged destination, complete with design elements and new cocktails that harken back to Raffles Hotel’s status as a literary muse.

Writer’s Bar is not a new concept to the Raffles Hotel. It was formerly a bar in the corner of the lobby, but it now occupies its own space, enclosed from the bustle of people passing through the hotel grounds. A step into the new space sees that the bar stays true to its name. The walls are lined with aged tomes dressed with great names from the English literary canon, hugging a bar counter backed by a vast collection of spirits. Obvious design elements aside, the Writer’s Bar has taken the intersections between Raffles Hotel, history and literature to its zenith with the creation of its cocktail menu, a collaborative effort between the head bartender, Paul Hammond, and bestselling author, Pico Iyer.

Iyer is the current writer-in-residence under the hotel’s new programme. Famed for his travel writings, particularly on Asia, Iyer lends his voice and body of work to the shaping of the new cocktail menu. The physical list of drinks is presented to guests in a leather-bound travel journal, featuring snapshots of Singapore, flight tickets, recipes, and scribblings from Iyer’s texts. The drinks that Hammond created in the spirit of a journey nod to local and international flavours, as well as experiences that have unfolded on the grounds of the hotel.

Eternal Youth is one such example. Served in an elegant coupe is an equally refined thirst-quencher that is the drink to have after escaping the brutal heat outdoors. Based on Billecart-Salmon Brut Reserve and the jasmine-forward Raffles 1915 Gin, this dry cocktail is layered with tart lemon, white vermouth and an osmanthus infusion called Forever Elizabeth, a reference to Elizabeth Taylor’s patronage of the hotel.

Tourists or those with a penchant for more localised flavours can order cocktails inspired by Singapore’s classic dishes, like Rojak, a sweet-and-spicy concoction with peanut calvados, chili and gula melaka, or Escape to Home, a long gin-based drink grounded by the aromatic mix of laksa leaf and burdock tonic.

The menu may be beautiful in look and taste, but it is not here forever. As part of the connection between the bar and the writer-in-residence programme, Hammond will refresh the compendium every time a new writer makes Raffles their abode.

For now till the middle of next year, at least, the current edition of the menu stays, and with it remains Iyer’s footprint on the bar and the hotel. When you choose to visit, order a glass of Eternal Youth and look around the Writer’s Bar. You’ll come to find Iyer’s observations ring true when he writes, “at Raffles, I’m brought back to something emotional that hasn’t changed in decades, and speaks for what connects us more deeply than anything in Starbucks or Uniqlo.” Though the hotel and bar may have transformed, the words that shaped it have not.

The Writer's Bar
Address
1 Beach Rd, Singapore 189673
Website
Website Here
Phone
+65 6337 1886
Raffles Hotel New Bars writer's bar
Beatrice Bowers
Features Editor
Beatrice Bowers writes about beauty, drinks, and other nice things. When not bound to her keyboard, she moonlights as a Niffler for novels and can be found en route to bankruptcy at your nearest bookstore. Don't tell her boss.
Drinks Beauty