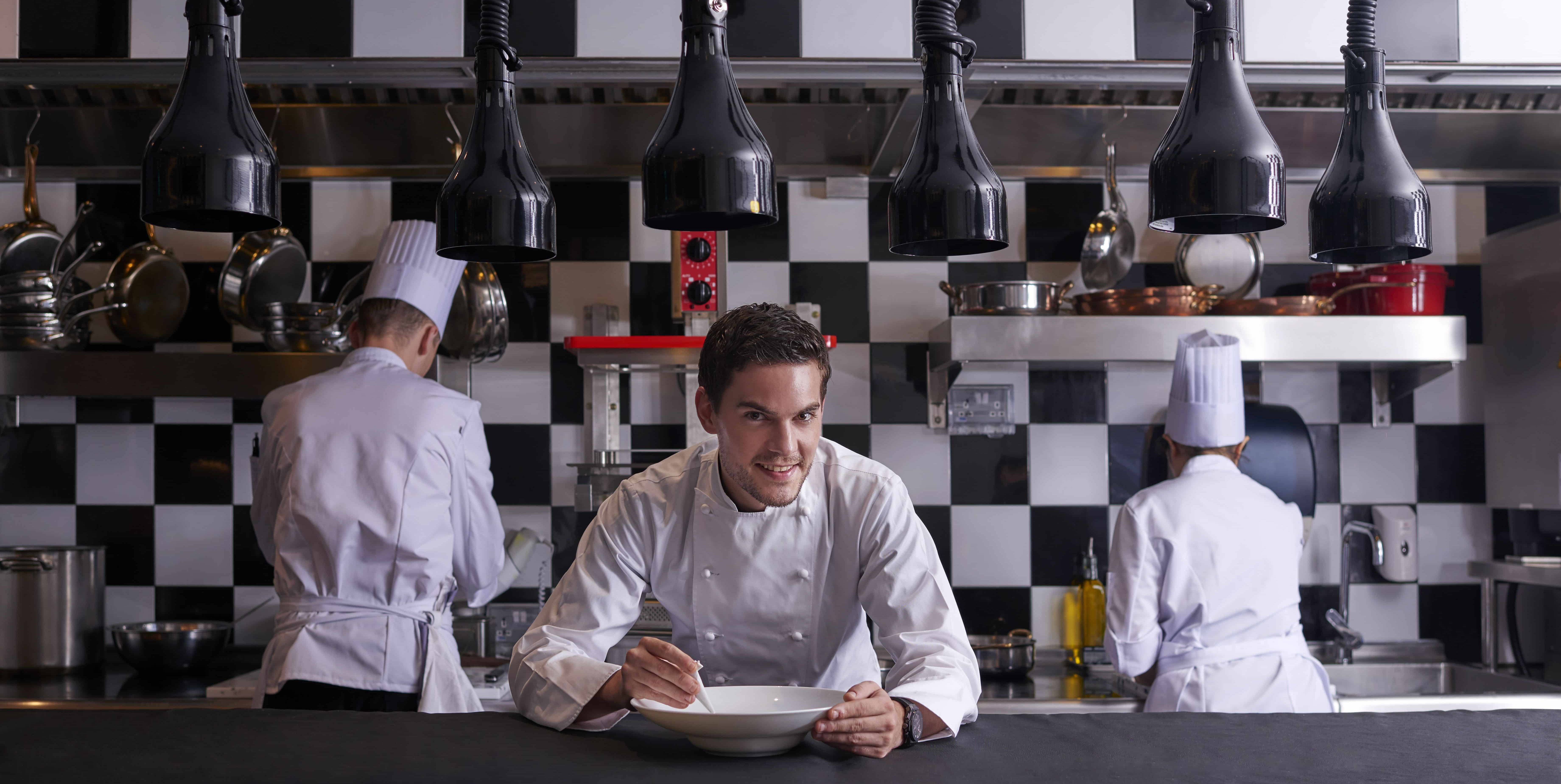 Review: Bacchanalia’s latest incarnation needs to find its own identity

Bacchanalia’s evolution has been both meteoric and erratic. In six years, what was once a series of indulgent brunches evolved to a full-fledged restaurant at the Masonic Club, which has now shifted along buzzing Hong Kong street all while transitioning between chefs and cuisines. In the midst of all this business, it has managed to whip up a Michelin star for two years straight.

Now, young blood pumps through Bacchanalia with a new owner, a new chef, and again, a different cuisine.

The 26-year-old owner Lim Kian Chun, co-founder of hospitality group Ebb & Flow, is eager to get two Michelin stars. Heading his ambitious goals is the equally-youngish Vianney Massot who was introduced last year as head chef of the now-shuttered L’Atelier de Joel Robuchon.
Young blood, however, doesn’t mean contemporary ideas. The duo has decided on the tried-and-true path to Michelin stars: fine-dining with all its formalities, a small restaurant dressed to the nines, and run by chefs with their toque blanches busying about.

Having toiled in Robuchon restaurants for more than a decade, Bacchanalia’s latest chef has inherited his late mentor’s eye for perfection in French cuisine. But as much as he tries to find his own individuality, Massot is very much still living in Robuchon’s shadow.

Ambience:
What’s left of Bacchanalia v2.0 is the open kitchen, first initiated by former chef Ivan Brehm, meant to break traditional barriers between kitchen and diners. Brehm carried the idea over at his own restaurant, which opened last year, and it has certainly worked in his favour.

But Massot is a stickler for tradition. Today, it’s simply a restaurant that’s flipped front to back. The open kitchen, which has now swallowed up the entire front of its shop house, is invaded by chefs and cooks in their stiff whites buzzing from one station to another.

Regulars of L’Atelier de Joel Robuchon will find the checkered floors of the kitchen very familiar. But similarities don’t just end there. The dining room at the back dons a near-identical carpet of swirls, and tables see neatly arranged Zalto wineglasses and the same gold Bernardaud plates that might set a trypophobe in fits.

Chef’s table can be found along the dark corridor leading to the more spacious dining room at the back. The latter might prove a more comfortable dining experience with relative privacy.

The cuisine at Bacchanalia is undeniably French, but Massot changes things up with hints of Asian influences and ingredients. As with the design of the restaurant, Joel Robuchon’s influence makes frequent appearances, say his signature bread basket, filled with brioche, baguettes, braids and all sorts of rolls, served with Beillevaire butter to diners here. The amuse bouche, by Massot’s admission, is an homage to his old mentor. Massot’s foie gras custard with port wine is a nod to the famous Le Caviar dish, albeit with different ingredients. Elegantly piped corn puree, followed by dots of parsley oil, circle around white truffle shavings and popcorn with gold leaf.

As much as possible, he weaves in produce from around the region. There’s ravioli of a fat Hokkaido scallop, dressed with a luscious lobster sauce spiked a little with Sarawak black pepper and a drizzle of chili oil to brighten it up.

In another, the Alba white truffle tagliatelle is a great way to savour the season’s hairy crabs without going through the hard work of digging through shells. The male crabs are rendered into a creamy vibrant sauce over the pasta with slivers of sweet crab roe. 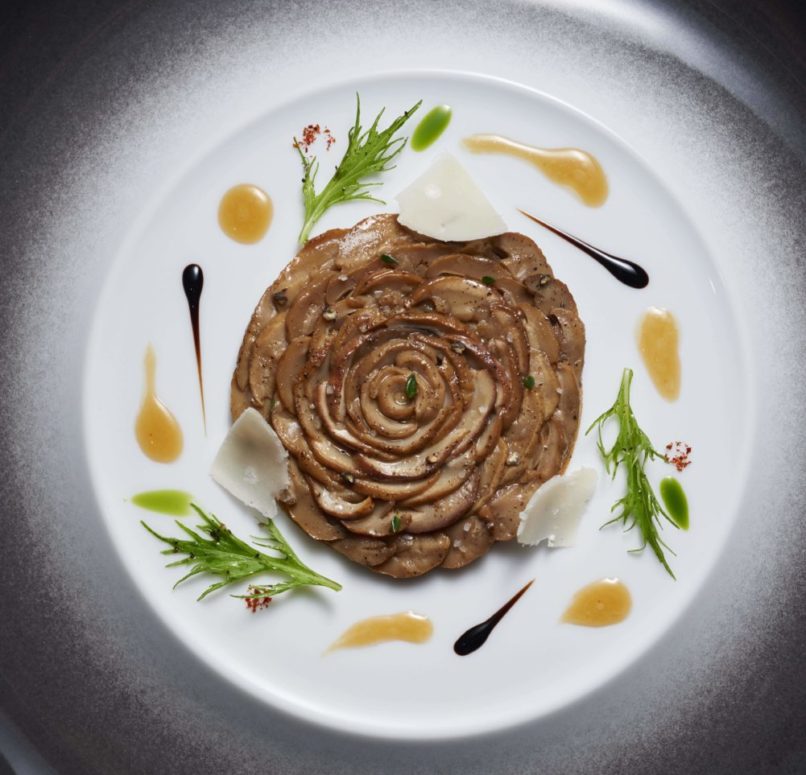 Of his original dishes on the menu, Le Cepe is a winner. Alternating slices of porcini mushroom and eggplant offer textural contrast over delicate feuilletine disc hiding underneath. The dish is accompanied with shavings of parmesan and an intense mushroom consommé, served tableside, for sipping in between bites.

Concluding mains is Massot’s attempt at appealing to Singaporean diners: a chicken rice-inspired dish. Sous-vide Bresse chicken is served with ivory sauce, baby mushrooms and carrots. It’s good cooking, the meat is tender and flavourful. But it’s also try-hard: it comes along with an unnecessary dish of risotto as a side just to further prove its humble origins.

Dessert, on one hand, is a light respite from a richly-flavoured series of dishes. First, diced pineapple and passionfruit is served with a heady granita of rum, but finds balance with light coconut foam. The last dessert is a great pick-me-up to shake one off an incoming food coma. The punchy combo of orange and bergamot sorbet is soothed out with earl grey tea jelly and light vanilla cream.

Verdict:
One would wonder what’s in Bacchanalia’s name. Perhaps, it’s just the star. There’s no doubt in anyone’s mind that the cooking at Bacchanalia, under Joel Robuchon’s protégé would be anything less than perfection. But it bears repeating: good food is no longer enough. Massot has all the fixings for a Michelin star, or two, at Bacchanalia. But he needs to rethink everything, and find that there’s much more to restaurant success than modelling after a great establishment. There’s great potential in Massot, and it is certainly exciting to see what’s coming up for him in the future. In the meantime, he needs time to find his own identity.

Bacchanalia by Vianney Massot Vianney Massot
Jasmine Tay
Senior Writer
Jasmine Tay is the dining, culture and jewellery writer. She makes fine silver jewellery and causes mini-explosions in the kitchen when she can't afford fancy dinners. Sometimes she tells people what she thinks about art, and binges on the music of Danzig when they don’t agree.
Dining Culture Jewellery