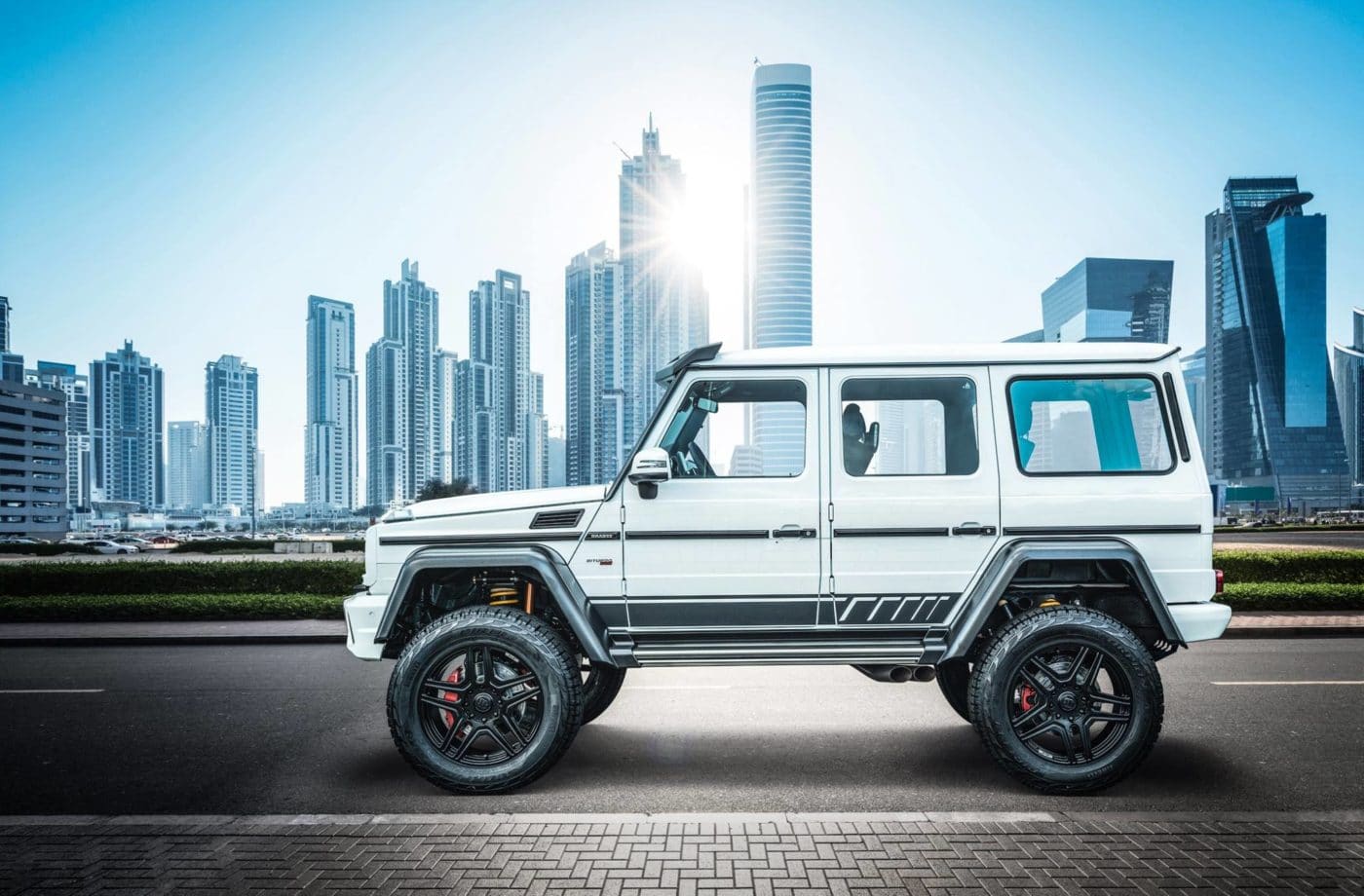 So much can be said about the Geländewagen. Launched in 1979 and then revived in 1990 with the G-Class 463, its cult status has driven an audience more akin to rappers and rich kids than outback explorers.

This year, the German marque has announced an almost identical-looking new generation, and Brabus has chosen to bid the 39-year-old icon farewell in the best way it knows how: by transforming it into the ultimate steroid-spiked super SUV.

Called a very mouthy Brabus 700 4×4² “one of ten” Final Edition, the blocky beast is still recognisable as a G-Wagen, only now it looks perfectly capable of completely obliterating a small city car.

It has 700 horses worth of grunt from its upgraded 5.5-litre twin-turbo V8, and – as encouragement to take this off-road –  a multi-adjustable off-road suspension with over 23-inches of ground clearance.

While we’re pretty sure no one is going to risk getting its pristine paint work (only available  in black or white) compromised, but if you do get adventurous, there are four driver-selectable driving modes to play around with.

Updated exhausts mean that everyone in the neighbourhood will be able to hear your V8 symphony loud and clear, especially seeing that this Brabus monster also has almost 300hp more zest than the regular version of the modest G-Wagen. Its torque rating is also a faintly frightening 960Nm, which is more than many supercars you can name.

Because of its massive tires, top speed is limited to 209kph, although Merc’s maddest tuner has promised a 0-100kph run in five seconds flat, putting it again in the range of many hot hatches and supercars. If that doesn’t sound fast enough for you, rest assured that anything more in this towering car would be almost suicidal.

Brabus’ swan song to the old-school icon is limited to ten precious units – all of which is probably accounted for by now.

Mercedes-Benz SUV G-Wagen Brabus
Shatricia Nair
Senior Writer
Shatricia Nair is a motoring, watches, and wellness writer who is perpetually knee-deep in the world of V8s, tourbillons, and the latest fitness trends. She is fuelled by peanut butter and three cups of coffee a day.
Motoring Wellness Watches

Style
All the fashion moments from the Grammys 2020 you need to know
Style
Trend: Capes are a new way to introduce dynamic silhouettes to your closet
Living
Can’t sleep? Here’s what to eat to make the most out of your bedtime
Culture
Q&A: How Kevin Cuturi, Founder of Cuturi Gallery wants to democratise the art world
Travel
A guide to Busan’s most charming cafes for all your Instagram needs
Style
The best looks from Paris Haute Couture Spring 2020
Beauty & Grooming
All the new beauty launches we need this February 2020
Style
What went down at Jean-Paul Gaultier’s last haute couture runway show
Living
How to create a contemporary Peranakan-inspired home
Sign up for our newsletters to have the latest stories delivered straight to your inbox every week.