This might be the gentlest, most road-biased McLaren to date, but the third of the ‘Sports Series’ after the 570S Coupe and 540S Coupe looks set to be the best of the lot. This is because despite being heavier, the new McLaren 570GT runs with the same fervour and determination as its 570S predecessor.

The GT might share the same chassis, suspension, engine and even its fascia is mostly identical, but walk around the side and you’ll immediately notice its party piece. Make that two actually, because now there’s not only a glass door that sits atop the engine compartment, it also stretches out to the roof of the car, so the car has a sense of openness we all know is not usually associated with sports cars. The side intake inserts are also now the same colour as the body for a more integrated and streamlined facade. 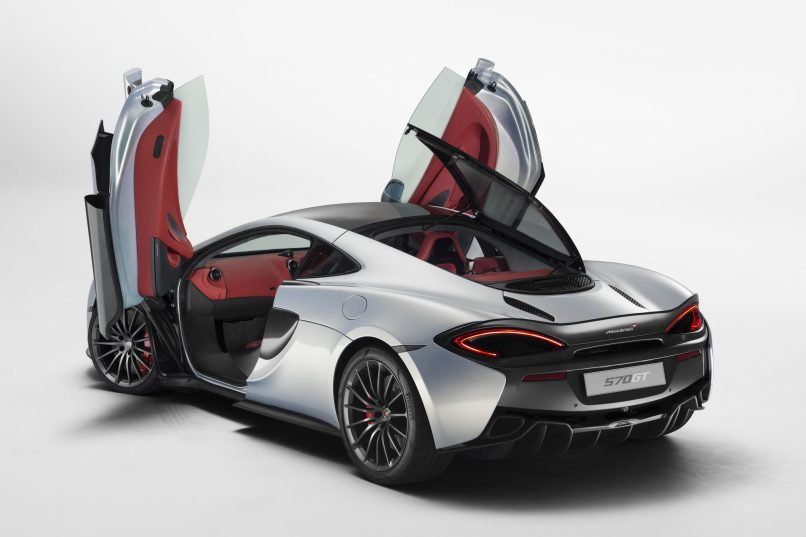 Like all McLarens, including the P1 and 540S, the 570GT uses a 3.8-litre twin turbo V8. Like the 570S, this grand tourer powers through the same 562hp, but gets you from nought to 100kph in a brisk 3.3 seconds. This is a tad slower than the 3.1 seconds from the 570S, courtesy of its 56kg gain after all the above-mentioned fanfare. Given enough runway, the beast within awakens at seventh gear, hitting a top speed of 328kph; it’s a track beast after all. Under its beautiful futuristic curves hides softer spring rates, now 15 and 10 percent less stiff at its front and rear respectively for a more comfortable ride.

Inside, the GT sees much more leather than its sport variation (hence the weight), alongside a standard 7-inch vertical touch screen that fuses seamlessly into the rest of the cockpit. For a marginal fee of USD2,240 (SGD3,110) you’ll get four extra Bower & Wilkins speakers on top of the given eight and USD6,080 (SGD8,440) will upgrade your seats to carbon-fibre racing ones, though we think the McLaren 570GT is already impressive in itself. After all like they say, the third time’s always a charm.

The McLaren 570GT is now available for order in Singapore, and will cost SGD920,000, excluding upgrades and COE.

McLaren Motors Luxury Sports Car McLaren 570S McLaren 570GT
Shatricia Nair
Senior Writer
Shatricia Nair is a motoring, watches, and wellness writer who is perpetually knee-deep in the world of V8s, tourbillons, and the latest fitness trends. She is fuelled by peanut butter and three cups of coffee a day.
Motoring Wellness Watches