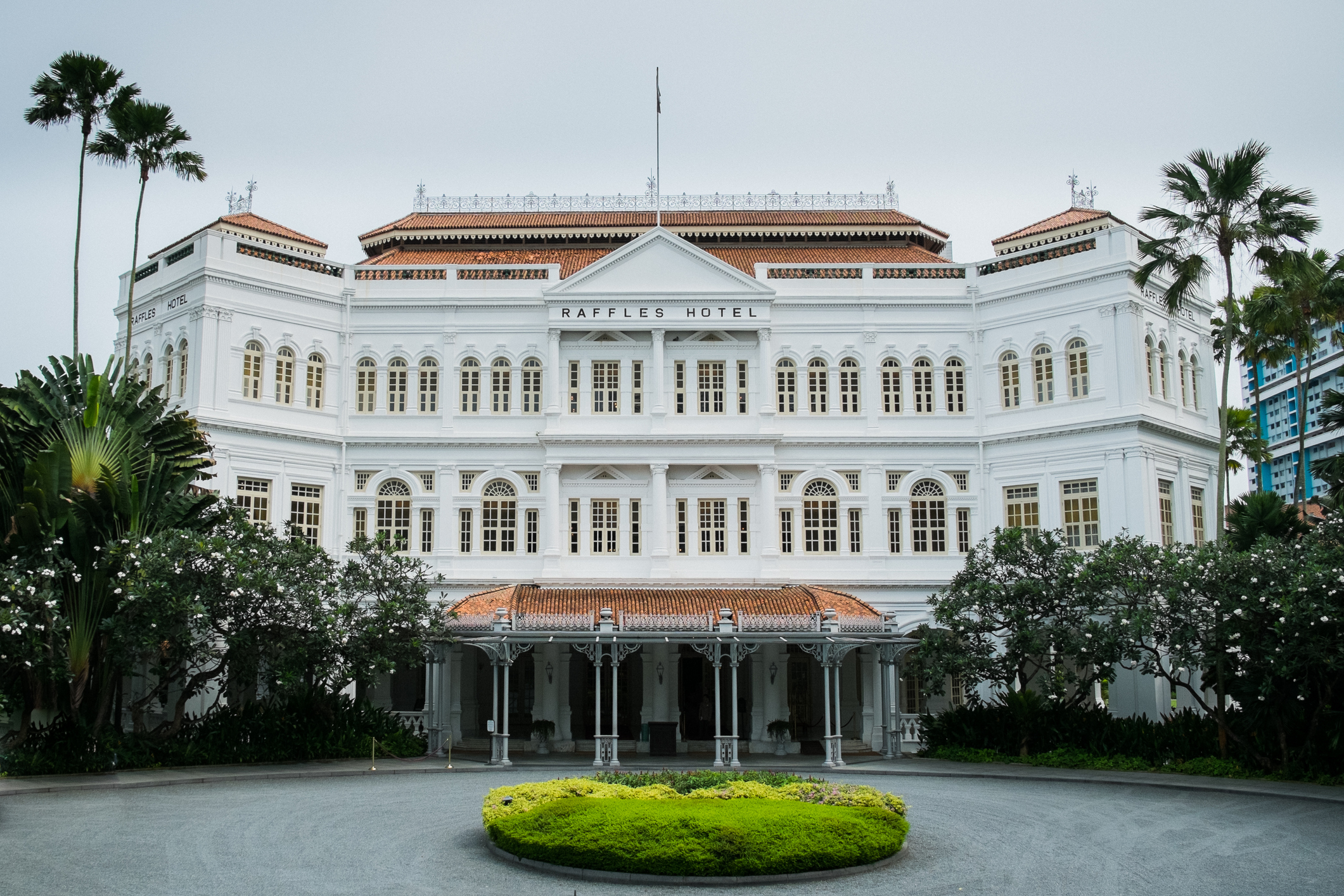 First-time visitors to the Lion City will marvel at its blend of old and new, seeing futuristic skyscrapers coexisting with heritage shophouses and decades-old monuments. Among Singapore’s most iconic structures is Raffles Hotel, a 130-year old landmark which stands just a stone’s throw away from some of the city’s stunning museums and tourist attractions, adding a unique contrast to its modern skyscraper neighbours.

Opened in 1887 by the Armenian Sarkies Brothers, the colonial-style hotel was originally a 10-room beachfront hotel housed within an old bungalow at the corner of Beach Road and Bras Basah Road. The hotel quickly evolved and was gazetted as a national monument in 1987, on its 100-year anniversary. The Raffles Hotel now boasts 103 suites, 14 different restaurants and bars, a Victorian-style theatre and a 24-hour luxury shopping mall.

One of the world’s few functioning 19th-century hotels, the Raffles Hotel is a beauty. Upon stepping in, you will be treated to an expansive white marble lobby with cathedral ceilings anchored by Corinthian columns. Its storied hallways have been graced by royals, celebrities and literary luminaries alike.

W. Somerset Maugham, Rudyard Kipling, Elizabeth Taylor, Charlie Chaplin and Michael Jackson (who celebrated his 35th birthday here) are among those who have fallen for the charms of the grand dame — and who can blame them?

Today, the hotel still sees illustrious guests such as the Duke and Duchess of Cambridge, Queen Elizabeth II, Christian Louboutin and Karl Lagerfeld. The latter stayed in May 2013, choosing the iconic hotel as the venue to premiere his short film on Coco Chanel called Once Upon a Time, further adding to its glitz and glamour.

Having celebrated its 130th anniversary, the hotel is set to embark on a restoration programme which will be carried out in three phases. The first phase, which began on 13 February this year, saw the temporary closure of Long Bar, Long Bar Steakhouse, Raffles Courtyard, Ah Teng’s Bakery and the Shopping Arcade. The second phase is set to commence on 13 August and will involve the renovation of the hotel’s lobby and some of its hotel suites.

The restoration project will be led by leading global architecture and design firm Aedas Singapore, which is no stranger to restoration projects. The firm’s other projects in the past include the London Coliseum and the revitalised Mallory Street/Burrows Street in Wan Chai, Hong Kong. The interiors, on the other hand, will be handled by award-winning designer Alexandra Champalimaud — who has worked with many high profile luxury hotels around the world including Hotel Bel-Air in Los Angeles and The Dorchester in London.

The hotel is conducting a guided tour in collaboration with the National Heritage Board before it commences the second phase of its restoration, so guests and members of the public can have a last look at the iconic hotel’s storied hallways and iconic suites — including the prestigious Sarkies Suite.

With names such as Aedas Singapore and Alexandra Champalimaud onboard, the hotel’s restoration looks promising. And while we patiently await the hotel’s reopening in 2018, check out these 6 things you never knew about Singapore’s crown jewel.

This will not be the hotel’s first refurbishment. The last restoration began in 1989 and took two and a half years to complete. The S$160 million project was spearheaded by a South Korean construction firm, Ssangyong Engineering and Construction.

While the origins of the Singapore Sling remains a contentious topic till this day, bartender Ngiam Tong Boon was said to have invented the famous cocktail in 1915 at the hotel’s Long Bar. In the past, it was not a norm for women to drink in public, so he created it to look like an ordinary fruit punch. Today, the drink remains the bestseller among visitors — men and women alike.

The popular Writers Bar in the lobby is a tribute to the novelists and travel writers who have become part of the hotel’s legend. Of notable mention is The Jungle Book author Rudyard Kipling. The Bombay-born English Nobel prize winner stayed in the hotel in 1889, en route to Japan when he was just 24. In his book From Sea To Sea, which he wrote the same year, Kipling describes the hotel as “a place called Raffles Hotel, where the food is excellent and the rooms are bad.”

Boasting 130 years of heritage, the hotel also has its fair share of loyal employees who are devoted to their work. The hotel is famous for its hospitality, seeing guests greeted by Sikh doormen upon arrival — one, Narajan Singh, is believed to be the hotel’s most photographed employee. The doorman responded to a recruitment advertisement in a newspaper 25 years ago, which sought someone who was “at least 1.9m” and “Sikh”.

The hotel’s longest serving employee? Leslie Danker (pictured) — who has been with Raffles Hotel since 1972. Naturally, his passion for sharing the hotel’s stories with guests has led him to take on the role of the hotel’s resident historian.

The hotel is home to many antiques. Among the many items at the hotel with historical significance is a silver beef trolley that is still in use at the Raffles Grill restaurant today. In 1942, it was buried in the Palm Court by hotel staff just hours before Singapore fell to the Japanese, and was only retrieved after the war was over. It was during the Japanese Occupation where the hotel was renamed Syonan Ryokan — which means Light of the South Hotel.

The Sarkies Suite, the hotel’s presidential suite, has hosted celebrities and royals over the years. This is where Michael Jackson was photographed waving from the window when he was performing in Singapore for his Dangerous World Tour in 1993.

More recently, this was also the suite of the Duke and Duchess of Cambridge when they visited the Lion City in 2012 — following in the footsteps of Prince William’s grandmother, Queen Elizabeth II, who stayed at Raffles during her visit to Singapore in March 2006. The ultra-prestigious suite comes at a price, though, costing S$13,000 a night.