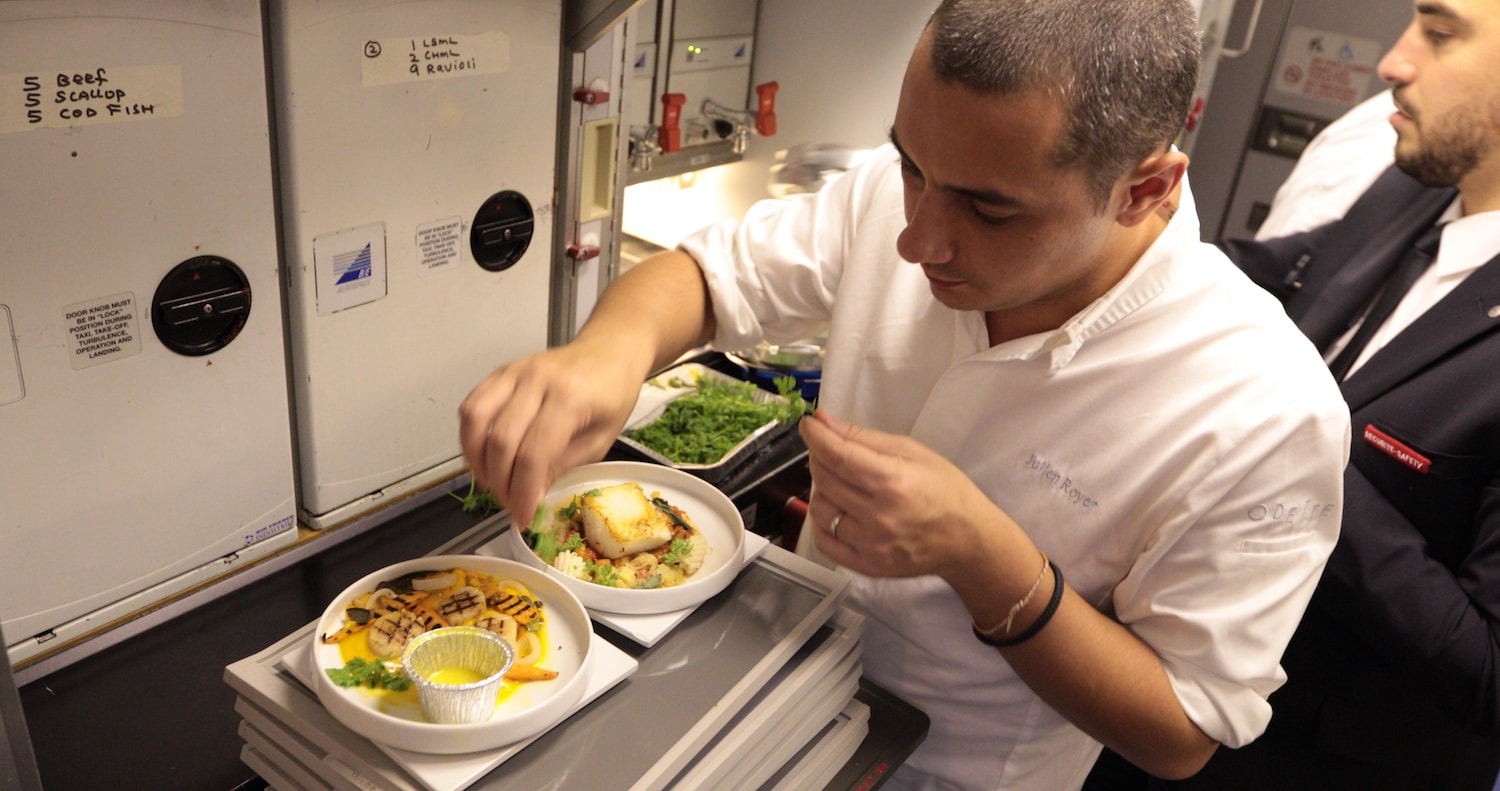 It’s no secret that the food served on airlines can make or break your experience onboard. How many times have you looked forward to meal service so you can tuck into the iconic Nasi Lemak dish on a Singapore Airlines flight, or the Hong Kong-style Curry Chicken on your Cathay Pacific leg?

Lucky for us, the in-flight menus of some of the top airlines have improved drastically the past few years. Gone were the days of being served bland, tasteless food — or even worse, cup noodles. Airlines now are upping their game to please even the most discerning of palates. In fact, a trend these days is the rise of partnerships between restaurants and internationally-renowned chefs, bringing their signature dishes to jet-setting foodies.

Singapore Airlines, for instance, announced a tie-up with Singapore-based wellness brand COMO Shambala. Starting from the second half of this year, the airline will bring COMO’s award-winning wellness cuisine on selected flights, elevating the range of food and beverage offerings on board. The dishes served across all cabin classes will marry healthy eating with gastronomy, with the use of seasonal and sustainable ingredients.

And then there’s Japan Airlines (JAL), which has been known to offer world-class cuisine — especially on its Business and First Class cabins. This year, JAL is working with renowned chefs such as Jun Kurogi (owner-chef of restaurant Kurogi), Hideki Ishikawa, and Kouji Koizumi. The result? Specially curated meals reminiscent of those served in the various restaurants.

Another exciting announcement made last month was by Air France. The French national carrier is partnering with Julien Royer, the chef behind the two-Michelin-starred Odette, which claimed the top spot on Asia’s 50 Best Restaurants awards ceremony last month. More recently, the restaurant was also crowned Restaurant of the Year at the World Gourmet Awards, which took place on 22 April.

However, this isn’t Air France’s first partnership with such a prestigious name. For many years, the airlines has worked with renowned Michelin-starred chefs such as the late Joël Robuchon, Michel Roth, Régis Marcon and Anne-Sophie Pic to showcase the best of French gastronomy to its La Première (First Class) and Business Class customers.
“When I met the very talented Chef Julien Royer on my first visit to Jaan several years ago, and subsequently to Odette, I knew we had to work with him – and thankfully he was equally keen to embark on a partnership with us to design signature dishes for our flights from Singapore to Paris-Charles de Gaulles,” said Nicolas Ricard, Country Manager for Air France Singapore.

At the launch of the partnership at Odette on 8 April, Royer prepared dishes such as the the grilled scallops with carrot mousseline and saffron nage, curated for Business Class, as well as the “Apicius” duck leg, with apples and confit lemons, for First Class.

Translating Michelin-quality food for the air

An ongoing debate is that the quality of airline food will never measure up against great dining on the ground. One factor is the exclusive atmosphere at a Michelin-starred restaurant, which is undeniably different to that on a flight — even if it’s First Class. But that’s not the only determining factor. Our tastebuds can also account for the completely different tastes of the cuisine.

This is no myth. It has been scientifically proven (according to a 2010 study conducted by Germany’s Fraunhofer Institute for Building Physics, commissioned by German airline Lufthansa) that the combination of dryness and low pressure reduces the sensitivity of your taste buds to sweet and salty foods by around 30 percent. In fact, the airline uses a hyperbaric chamber in Munich to taste-test its food. That way, they pressurise it to what an aircraft is flying at when it’s at 35,000 feet and they taste the meals.

“Food and drink really do taste different in the air compared to on the ground,” said Charles Spence, professor of experimental psychology at Oxford University, in an interview with the BBC. “There are several reasons for this: lack of humidity, lower air pressure, and the background noise.”

Royer shared the same sentiments: “Creating dishes in the air is completely different from creating meals on the ground. For one, the choice and selection of products need to be carefully considered, bearing in mind conditions in the cabin – like low air pressure and low air humidity, that can affect how food retains its freshness.”

To control this, the chef alters the ingredients and produces used in the specially-curated menu for Air France.

“That’s why we used produce and ingredients such as pork belly that have higher fat content to keep it moist even when 35,000 feet in the air,” he added. “Recipes and processes also have to be tweaked accordingly for optimal tastes, especially when consumed at that altitude – and that includes confit of our duck and beef ribs.”

Where is this trend heading?

As one airline improves their in-flight menu game, the next one rushes to usurp it. From here, the only way is up.

We asked Royer what he thinks of the the trend. “It is tough to anticipate where this trend is heading as companies are always adapting to meet ever-changing consumer demands. But I expect airlines will continue upping the ante, and provide products and services that will keep pushing the boundaries of excellence and innovation,” he told us.

Travel Restaurant Airlines Julien Royer Odette
Dewi Nurjuwita
Senior Writer
Dewi Nurjuwita is a travel and design writer who can be found exploring the streets of foreign cities with passport in one hand and a cup of coffee in the other.
Travel Architecture Interior Design